SaveOnBrew.Com, the world's only beer price-search engine, has created an infographic of Super Bowl beer consumption that shows the beer "cycle of life" during the big game. 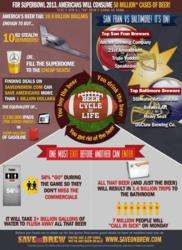 We thought the consumption numbers would be significant and turned our creative team loose. They came back with the beer cycle of life, which just seemed to fit perfectly.

SaveOnBrew, the world’s only beer price-search engine, announced the release of their 2013 Super Bowl beer study.

“We really didn’t know what we’d find. We thought the numbers would be significant and turned our creative team loose. They came back with the beer cycle of life, which just seemed to fit perfectly,” said Mark Davidson, founder and COO.

The data is based only on beer purchased through grocery, liquor, and convenience stores in the two week period leading up to super Sunday. Beer consumed “on-premises” (bars, restaurants, the stadium) is not included. Some Beer Institute estimates for the period leading up to the game at close to 325 million gallons – 3% of yearly consumption.

The full sized infographic can be viewed at SaveOnBrew.

SaveOnBrew estimates consumers could save significantly just by using their service for their Super Bowl beer purchase. “It’s smart to price-shop beer. There can be vast differences within small geographic areas,” said Davidson. SaveOnBrew estimates it could save cash-strapped consumers more than a billion dollars on their Super Bowl beer purchase. “With SaveOnBrew, you just put in your zip code and all of the deals in your neighborhood pop up. We even have maps for the geographically challenged. Sometimes you see a deal on a beer you wouldn’t have tried if it wasn’t on sale.”

SaveOnBrew uses proprietary technology to scour the country for advertised beer deals. They currently poll 50,000 convenience, liquor, and convenience stores and, at any given moment, have between 250 – and 300 thousand advertised beer deals live on their site. “People are really struggling to make ends meet. We want to help them save money on the world’s most widely consumed adult beverage.”

Founded in 2010 to help thirsty beer drinkers across the United States find the lowest advertised prices for one of the world’s most popular beverages.