Voto is a new social networking iPhone app that helps shoppers and brands answer the “which?” question. Offering choices between two, three, or four options, instead of just “yes or no” or “this or that,” Voto creates a mobile voting experience like nothing else on the market. 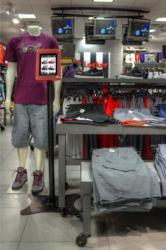 Our vision for Voto is to gain valuable analytics from the mobile social marketing space using images,

Shaun Neff, owner of the brand Neff, recently started using Voto by asking the question “What’s your favorite NEFF daily beanie color?” After posting four images of blue, black, pink, and gray color options, the votes start rolling in. Currently the gray beanie weighs in with the winning votes at 47% more than the other three options. Mr. Neff’s “voto” is a great example of the power behind the new Voto mobile app for retailers and brands.

Voto allows users to get quick feedback from their closest friends while shopping, or trying to make any decision for that matter. Users simply take photos with the iPhone camera, upload saved images, or find images with the in-app Google search, to create an array of photos. This compilation of photos then posts to a feed similar to popular social apps, and can be voted on by anyone logged in to Voto. After the user has voted, they can see a percentage on each option that will change according to the votes that come in, with a star icon signifying the winning vote.

“When deciding on the name of the app, we wondered what would happen if a photo and a vote had a baby?” Nick Ames, Marketing Director explains, “we decided it would be a Voto, and went with that name.”

Voto has a lot of engagement for its small, yet rapidly growing community. Unlike other social polling mobile apps, Voto users are required to login using their Facebook profile before voting, therefore there are only real people interacting, providing 100% authentic analytics data. Some of the unique features of Voto include: filter by categories, see where friends have voted, and share to Facebook, Instagram, E-Mail, SMS, or URL Copy.

“We created Voto to be an easy and fun way to ask questions to a social network using images,” says Scott Paul, CEO/Founder of Voto. “Our vision for Voto is to gain valuable analytics from the mobile social marketing space using images, which will provide brands and stores with almost real-time data for making future business decisions.”

Scott is also Founder/Owner of ArmorActive, Inc., a company that pioneered the iPad kiosk industry and has revolutionized the way people do business with tablets. Working with major retailers such as Nike, GAP, Foot Locker, and Nordstroms, ArmorActive has identified a need to provide these brick-and-mortar locations with digital touch interaction. Now that the iPad kiosk has bridged that gap, the question remains, what is the best iPad kiosk app for this space? In an effort to answer this question, ArmorActive is currently developing Voto Kiosk and Voto Booth iPad apps, both of which will be variations of Voto specifically designed for businesses.

Voto Kiosk will allow companies/brands to create their own Voto survey feed through their profile, which will only show only their votos. This provides a fun and engaging way to survey customers by motivating feedback through selecting images rather than boring text. Retailers will have the ability to know shopping behavior trends between several brands or styles of a product. Brands can identify which color, style, or specific product they should offer next, based on customer feedback, before even making the product.

Alternatively, retail stores will be able to set up Voto Booth in their locations to allow shoppers to create a voto while shopping. For example, someone shopping at Sunglass Hut can try out their sunglass options, then post a question “which look the best on me?” to the public Voto feed using the Sunglass Hut Voto Booth iPad kiosk. They will then be able to receive instant feedback from all Voto users, before making the purchase.

The key component to Voto Kiosk and Voto Booth is the ArmorActive iPad kiosk hardware support, which will enable these apps to be securely displayed in retail locations. ArmorActive’s wide variety of iPad kiosk hardware offers wall, table or floor mounting options, as well as metal, wood, or acrylic finishes. Additionally, retailers can custom brand the kiosks with their logo to increase brand awareness.

About ArmorActive
ArmorActive is a global iPad security solutions company. Unique in the industry, ArmorActive provides a team of Account Managers to help customers make the best decisions at all stages of their tablet-based projects, from procurement to implementation. A wide variety of ArmorActive products are available at http://www.ipadenclosures.com