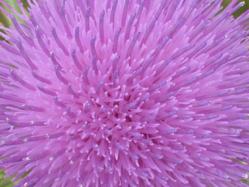 “When you have a cell affected by UV radiation, you either want to repair it or kill it so that it cannot go on to cause cancer. We show that silibinin does both,” says Rajesh Agarwal, PhD, co-program leader of Cancer Prevention and Control at the CU Cancer Center and professor at the Skaggs School of Pharmacy and Pharmaceutical Sciences.

The first study, published in the journal Photochemistry and Photobiology worked with human skin cells subjected to UVA radiation, which makes up about 95 percent of the sun’s radiation that reaches Earth. The Agarwal Lab treated these UVA-affected cells with silibinin. With silibinin, the rate at which these damaged cells died increased dramatically.

“When you take human skin cells – keratinocytes – and treat them with silibinin, nothing happens. It’s not toxic. But when you damage these cells with UVA radiation, treatment with silibinin kills the cells,” Agarwal says, thus removing the mutated cells that can cause skin cancer and photo-aging.

Specifically, the study shows that pretreatment with silibinin resulted in higher release of reactive oxygen species (ROS) within the UVA-exposed cells, leading to higher rates of cell death.

The second study, published this month by the same authors in the journal Molecular Carcinogenesis shows that instead of beneficially killing cells damaged by UVA radiation, treatment with silibinin protects human skill cells from damage by UVB radiation, which makes up about 5 percent of the sun’s radiation reaching Earth.

Again, remember Agarwal’s suggestion that the prevention of UV-induced skin cancer can happen in two ways: by protecting against DNA damage or by killing cells with damaged DNA. With UVA, silibinin kills; with UVB, it protects, in this case by increasing cells’ expression of the protein interleukin-12, which works to quickly repair damaged cells.

“It has been 20 years of work with this compound, silibinin,” Agarwal says. “We first noticed its effectiveness in treating both skin and solid cancers, and we now have a much more complete picture of the mechanisms that allow this compound to work.”

Agarwal and colleagues continue to test the effectiveness of silibinin in cancer prevention and treatment in cell lines and mouse models, and are working toward human trials of silibinin-based therapeutics.