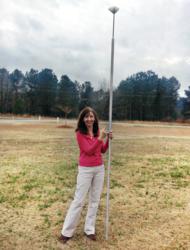 LBA Technology, Inc., a division of LBA Group, Inc., has introduced a new LRE-series of lightning air terminal extenders to facilitate protection of sensitive electronic, communication, and mechanical assets. The LRE-series of extenders adds a critical step in the quest to put lightning where it belongs, the ground.

Conventional practice has been to place lightning rods or air terminals directly on the structure of outdoor air handling units, control boxes, antenna, CCTV, stacks, chimneys and lighting masts. This type of arrangement permits lightning strike charges to flow not only through the mast or structure, but through its attached sensitive equipment as well.

The missing link in the effort to effectively protect hardware and lives from the damage Mother Nature can impose from lightning is the LRE-series of extenders. The independently mounted extenders solve the problem by extending the air terminal well above the equipment requiring protection. This more effectively controls the lighting path. Charges are routed directly to ground, bypassing exposed equipment or cable routings.

Models LRE-8 and LRE-14 are initially available from LBA Technology to elevate air terminals eight feet and 14 feet, respectively. These extenders are constructed of heavy-duty aluminum and meet NFPA requirements. They can also be used with most UL-rated air terminals and mounted with an assortment of mounting options, including a non-penetrating roof mount.

This new piece of lightning protection hardware is particularly effective when coupled with the LBA series of field dissipater air terminals. System kits are available to combine the LRE-series lightning air terminal extender with a number of available dissipaters. Unlike conventional air terminals, these charge dissipation air terminals bleed off accumulating electrostatic energy, reducing the potential for actual lightning strikes.

LBA is introducing the commercial grade LRE-series at a very cost effective price point. The extenders are also designed to be easily assembled and disassembled for efficient UPS shipping.

For more information on the new LRE-8 or LRE-14 and he full line of LBA lightning protection products, go to: http://www.lbagroup.com/international/tower-lightning-protection.php, or contact Byron Johnson at LBA Technology, Inc., byron.johnson(at)lbagroup(dot)com, 252-317-2128.