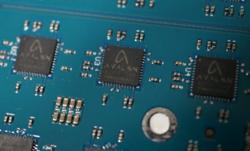 After a year of speculation and rumor, the first application specific integrated circuits (ASICs) dedicated to Bitcoin mining have become a reality. Yifu Guo, 23, is now commercially shipping the fastest dedicated Bitcoin mining hardware in the world.

The custom processing hardware dramatically increases the security of the Bitcoin network and professionalizes the Bitcoin mining industry.

Yifu’s Las Vegas-based company, BitSynCom LLC, coordinated with partners in mainland China to make their ASIC project a reality. Named the “Avalon ASIC V1,” the mining hardware processes data at a speed of more than 65 gigahashes per second using only 500 watts of electricity. This represents a roughly 50x increase in mining efficiency.

There is no central company or server behind Bitcoin, rather it relies on a distributed network (similar to peer-to-peer file sharing). “Bitcoin mining” is the process of auditing financial transactions on this distributed global network. Traditionally, mining has been done with powerful desktop graphics cards, and “miners” are rewarded for contributing to this auditing process with newly created bitcoins. The current exchange rate for one bitcoin is roughly twenty dollars.

While a typical desktop computer could “mine” a few dollars of bitcoins per day, the Avalon ASIC V1, which costs $1500 (payable only with bitcoins), currently earns $200-$300 per day. As more ASICs join the network, however, the mining difficulty will increase proportionally and the rate of profit will be reduced.

Several other US-based companies were also in the race to be first-to-market, but have suffered significant production delays.

“One of the most important consequences of ASICs is that normal desktop computers will be made increasingly irrelevant for Bitcoin mining,” says Yifu Guo, CEO of BitSynCom LLC, “this means that botnets, under the control of hackers, will find it harder to profit from this activity. The incentive for hacking computers to engage in Bitcoin mining will be greatly reduced, and the resilience of the network will be greatly enhanced.”

Charlie Shrem, Vice Chairman of the non-profit D.C.-based Bitcoin Foundation, praised the device, "This technological breakthrough not only brings a long awaited and hotly contested first-to-market product, but goes down in the Bitcoin history books as the new era of Bitcoin mining."

Earlier this week, the Bitcoin network achieved a market capitalization of over $200 million and is processing over 40,000 financial transactions per day.