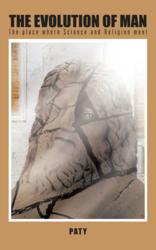 Demanding a religious debate, Paty, reviews the perceptions, misconceptions, and inaccuracies of the modern Bible as it relates to scientific facts in his latest book The Evolution of Man.

Working to meld the worldviews of science and religion, Paty explains how the evolution of the Bible and the verbiage has evolved to imply a different meaning than it’s original intent. Because the language of the Bible has changed he believes this has spawned the clash between deists and academics.

Covering a variety of controversial subjects, Paty aims to educate readers and standardized the way of writing and understanding the Bible. Paty offers theories ranging from the Garden of Eden, to Noah’s ark and its creation, to the evolution of man’s ability to think, draw, and build.

By debunking the misrepresented philosophies passed from generation to generation, Paty answers common Scripture questions and ignites the discussion that unifies scientific thinking with Biblical history. Ultimately, Paty poses the overarching concept that things of the old world must too evolve as man has done since the beginning of time.

The Evolution of Man
The Place Where Science and Religion Meet
By Paty
ISBN: 978-1-47723-087-9
Available at Amazon, Barnes and Noble, and AuthorHouse online bookstores.

About the author
A native of Liberia, Paty’s experience in education stems from his previous work as a primary and vocational school educator and having attended Tabou-Techinical Education Center in Ivory Coast. Currently located in Buchanan, Paty continues to pursue his passion in understanding and promoting Biblical Scripture.