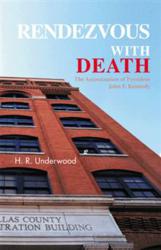 Hopefully, the reader will come away with a much greater depth of knowledge regarding the Kennedy assassination

“In March 1991, when I started writing the book, its scope was only the events surrounding the shooting, location and sequence of the shots,” remembers Underwood. “As I researched, the scope of the book expanded to exploring the various conspiracy theories and trying to arrive at what I believe is a plausible explanation for not just the shooting sequence, but the catalyst for the assassination.”

“Rendezvous with Death” presents the facts surrounding the assassination of President Kennedy and a detailed explanation of the shooting as it occurred according to the factual evidence. Underwood explains that a considerable amount of false leads exist in the evidence, turning the case into a quagmire of contradictory and unreliable assertions. The major task undertaken, he asserts, was to determine fact from fiction, and to shift truth from rumor and speculation.

Underwood’s conclusions are based primarily on a close examination of the Zapruder film, with documentation provided by numerous sources. “Although the Zapruder film shows evidence of splicing, it still remains as one of the most significant pieces of JFK assassination evidence,” says Underwood. “With the release of “Rendezvous with Death” he hopes to provide readers with a comprehensive study of the facts surrounding the assassination.”

“The book deals with an issue that has fascinated and puzzled the American people for almost 50 years,” states Underwood. “Hopefully, the reader will come away with a much greater depth of knowledge regarding the Kennedy assassination.”

About the Author
H. R. Underwood is a native Texan and an Anglophile. His avid interest in history, intrigue and interesting tales led to the writing of this book.