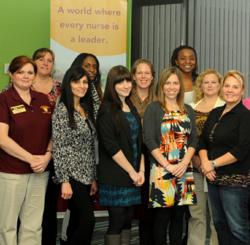 Traineeship support is an example of work force development policy in action. The federal government has designated these scholarships to build capacity in primary care.

The scholarship support is especially important as the nation experiences the burgeoning need for access to primary care and a greater demand for family nurse practitioners, according to Ann H. Cary, Ph.D., M.P.H., R.N., professor and director of the School of Nursing.

Helne, now in her third semester of the Loyola DNP program, knew she wanted to go back to school to become a nurse practitioner after volunteering in Haiti following the devastating 2010 earthquake. Although Helne, who speaks both Creole and Spanish, was instrumental in communicating with health care professionals and earthquake victims in Haiti, the experience gave her a thirst for a stronger knowledge base.

“I wanted to know more. I wanted to be a resource and a reference for patients,” Helne said.

Cary herself was a recipient of one of these federal traineeships while pursuing her master’s degree. “Traineeship support is an example of work force development policy in action,” Cary said. “The federal government has designated these scholarships to build capacity in primary care.”

High-resolution photos are available upon request. Contact Mikel Pak, associate director of public affairs, at 504-861-5448 or mlpak(at)loyno(dot)edu for more information.

Support for the Advanced Education Nursing Traineeship program is funded by the Division of Nursing, Bureau of Health Professions, Health Resources and Services Administration, Department of Health and Human Services to Loyola University New Orleans under grant number A10HP25115 for $700,000.00 for 2012-2014.

The application deadline for the new class of Loyola School of Nursing Post-Baccalaureate-to-DNP or Post Masters-to-DNP online programs is Feb. 15.

The Loyola University New Orleans School of Nursing offers online degrees for RN-to-BSN, RN-to-MSN, MSN in HCSM, and the Post BS-to-DNP and Post Masters-to-DNP. Loyola’s nursing program is based on Jesuit values and educates professional nurses to lead change and translate science into practice in a dynamic global health care environment. Loyola’s School of Nursing is consistently ranked by both U.S. News and World Report and thebestcolleges.org as one of the premier nursing schools in the country. The online graduate nursing programs at Loyola—the Master of Science in Nursing and the Doctor of Nursing Practice—are ranked in the top six graduate nursing online programs in the U.S. by the U.S. News & World Report 2013 rankings. For more information about the nursing online programs, including application requirements, visit the Loyola School of Nursing website.