A class action lawsuit alleging patrons of the Golden Corral restaurant in Casper, Wyoming became ill with norovirus after eating at the restaurant was filed Friday in Federal District Court in Wyoming. 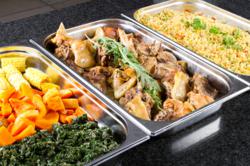 Our clients and our team are committed to making sure that this kind of outbreak never again happens to the community of Casper. – Jason Edward Ochs

Customers of the Casper, Wyoming Golden Corral filed a class action lawsuit against the restaurant Friday, alleging they were part of a norovirus food poisoning outbreak that was traced to food served at the restaurant in December. The lawsuit was filed in Federal District Court in Wyoming (Case Number 13CV024J) by Jason Ochs of The Ochs Law Firm and William Marler of Marler Clark.

According to a Wyoming Department of Health (WDOH) report, at least 305 patrons of the Casper Golden Corral restaurant became ill with norovirus infections after eating at the restaurant between November 17, 2012 and December 19, 2012. Norovirus infection causes nausea, diarrhea and/or vomiting and is highly infectious. Investigators from the Wyoming Department of Health Infectious Disease Epidemiology Program and Casper-Natrona County Health Department stated in their report that they were not able to determine exactly how norovirus was introduced to the restaurant, but said ill food-handlers could have contributed to the spread of norovirus among Golden Corral patrons. According to the WDOH, 31 employees who worked at the Golden Corral restaurant were infected with norovirus while working.

The complaint states that named plaintiff Paul Feyhl, a Casper resident, ate at the Golden Corral restaurant on December 8, 2012 and subsequently fell ill with norovirus. According to court documents, the lawsuit was filed on behalf of Mr. Feyhl and “others similarly situated” who purchased food or drink at the Golden Corral Casper restaurant between November 20, 2012 and December 13, 2012 and whose exposure to norovirus was caused by:

“Our clients and our team are committed to making sure that this kind of outbreak never again happens to the community of Casper.” – Jason Edward Ochs

BACKGROUND: The Ochs Law Firm is a complex-litigation law firm headquartered in Casper, Wyoming with offices in Jackson Wyoming, California and Colorado. Jason Edward Ochs represents consumers across the country in product liability and class action lawsuits. Marler Clark is the nation’s leading law firm representing victims of foodborne illnesses such as norovirus, Salmonella and E. coli. The firm has represented thousands of victims in litigation stemming from the sale of unsafe food products and has recovered over $600 million on behalf of victims of food poisoning.