New CDC Vital Signs: Smoking among those with Mental Illness 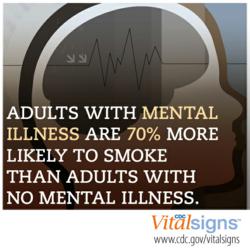 Adults with Mental Illness are 70% more likely to smoke than Adults with no mental illness.

Smokers with mental illness, like other smokers, want to quit and can quit. Stop-smoking treatments work-and it’s important to make them more available to all people who want to quit.."

Adults with some form of mental illness have a smoking rate 70 percent higher than adults with no mental illness, according to a Vital Signs report. Combined data from SAMHSA’s 2009–2011 National Survey on Drug Use and Health (NSDUH) were used to calculate national and state estimates of cigarette smoking among adults aged 18 years and older who reported having any mental illness.

"Smokers with mental illness, like other smokers, want to quit and can quit. Stop-smoking treatments work-and it’s important to make them more available to all people who want to quit."
said CDC Director Thomas Frieden, M.D., M.P.H.

“Special efforts are needed to raise awareness about the burden of smoking among people with mental illness and to monitor progress in addressing this disparity. ” said Pamela S. Hyde, JD Administrator, Substance Abuse and Mental Health Services Administration.

Cigarette smoking continues to be the leading cause of preventable death and disease in the United States and throughout the world. Cigarette smoking is responsible for an estimated 443,000 deaths in the United States each year. For quitting assistance, call 1-800-QUIT-NOW (1-800-784-8669) or visit http://www.smokefree.gov. Also, visit http://www.BeTobaccoFree.gov for information on quitting and preventing children from using tobacco.

Adult Smoking Focuses on People with Mental Illness: More than 1 in 3 adults (36%) with a mental illness smoke cigarettes, compared with about 1 in 5 adults (21%) with no mental illness. About 3 of ev

Smoking harms nearly every organ of the body, causing many diseases and affecting the health of smokers in general, as well as those inhaling “second hand” smoke. Quitting smoking has immediate as wel