In his new book, he reminisces the horrible catastrophe brought about by the Great Norwich Flood of 1963. 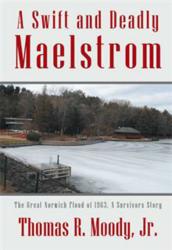 The winter of 1962–63 in Norwich, Connecticut, had been unbearable. Snow, ice, and subfreezing temperatures added to an already gloomy and drawn-out New England winter, one that had seen its onset begin virtually at the end of the summer of 1962. Spaulding Pond in Mohegan Park, a large wooded enclave in the northern section of town, was again abundantly full this Wednesday, March 6. So full in fact that it again challenged the 110-year-old dam by which it was held in place and where a small leak, another in an ever-growing line of recent “seepages,” was discovered this afternoon by park workers and reported up to the Public Works director, himself a witness to these myriad other leaks and who would summarily dismiss it this day as understood leakage.

This time, unfortunately, it would be different.

A Swift and Deadly Maelstrom is the true story of a horrible tragedy borne out of ignorance and naivety. It is also the story, conversely, of life-saving heroics, of the efforts of two young men, suddenly trapped in the ensuing floodwaters, to rescue three very young children, those that would tragically lose their mother in this disaster. Also, it is the fascinating account of how this family would pull itself back together and how the children’s father and one of that evening’s heroes would subsequently and slowly fall apart emotionally and physically over his lifetime. All of this is juxtaposed onto the real-time reportage of how the town would also recover and how the families of the six people who would ultimately succumb to the raging dam break would perceive themselves to be unfairly and unjustly recompensed in the follow-up litigation.

Thomas R. Moody Jr. is one of the young children who experienced the “Great Norwich Flood” firsthand and who tragically lost his mother that horrific evening of March 6 1963. He provides now, for the first time, a revealing history of this catastrophic event and, with the benefit of nearly a lifetime of saved and newly discovered documentation, along with numerous first-person intimate conversations with family members and other key participants, becomes, with this work, the first to fully integrate all the disparate, and sometimes controversial, facts into one cogent story. He is a nuclear power plant supervisor and lives in Texas with his wife, D’Ann, and children, Brooklyn and Evan.