The newest BankingBad™ YouTube Channel Video features the Bank of America home loan story of Musician Dave Nichols who fights the bank to save his home from what he claims was an interest rate error. Dave known by his rap name Nichol9 raps on a new song titled “I Told You So” with 3 members of Eminem’s Detroit crew D12 and “I told You So” provides a potent soundtrack for the new Banking Bad “BOA” video. 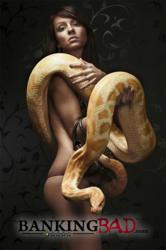 As an artist I could relate to Dave’s struggle, and it seemed like Bank of America was systematically robbing him. I figured the best way to fight back as artist was through art, so I made a short film about his story featuring his music.

The BankingBad™ YouTube Channel just released a new video asking Bank of America to correct an alleged bank error on one of their customer’s home loans. This particular bank customer happened to be an aspiring musician who has just recorded a new single with members of Eminem’s renowned Detroit rap crew D12. The new song titled “I Told You So” serves as the backdrop of this unique consumer advocate video created by director De Veau Dunn for the Banking Bad YouTube Channel. The video is also a current topic of discussion in the new Banking Bad Forum for disgruntled banking customers.

Many consumers caught in the American housing crisis that has engulfed countless US citizens have found an unlikely resource from an upstart consumer advocate YouTube channel titled Banking Bad. The Banking Bad network is dedicated to educating and informing the masses of outstanding or immoral activities by large banking institutions and has been featured on prominent media sites such as MSN (BankingBad) and Bloomberg’s Businessweek for their unique brand of consumer advocate videos. Their first video titled “Bank of America wants you to die… before they Modify” has been viewed well over 50,000 times since it’s launch on the Banking Bad YouTube Channel less than a year ago. The latest video titled “BOA Strangles Musician – Banking Bad Episode 3,” has already started to climb in popularity on the channel as well.

The latest Banking Bad video describes the story of Dave Nichols, a musician who received a loan from Country Wide Home Loans and the rate on that particular loan adjusted up prematurely, claimed Dave Nichols. Country Wide was later acquired by Bank of America and the video details how Mr. Nichols asserts that he asked Bank of America to repair this error for more than two years to no avail, and finally contacted the Banking Bad network for help with his mortgage after the bank attempted to take his home. Video director, De Veau Dunn took on the project and when asked why he took on the endeavor Mr. Dunn replied, “As an artist I could relate to Dave’s struggle, and it seemed like Bank of America was systematically robbing him by not addressing their error. I figured the best way to fight back as an artist was through art, so I made a short film about his story featuring his music.”

Banking Bad also enlisted the help of Steve Triebernig, a homeowner advocate and CEO of All Things Real Estate Inc. Steve Triebernig has helped many B of A customers with his popular website and associated Facebook page “Keep Bank of America Honest.” Steve had help over 1100 families save their homes and assisted them in their battles with some of America’s largest banks. When asked why he teamed up with Banking Bad, Steve said, “When I saw De Veau’s first video on the Banking Bad YouTube channel I thought it was extremely compelling. He is a very creative videographer and when you take all the raw case information that I have and let him do his thing to it, it seems he can create a video that has been shown to connects the viewer with the genuine emotions of the often horrendous situations that the banks are putting some of these family’s through.”

Banking Bad uses social media to initiate grass roots advocacy for people who may not always be able to face big banking institution on their own. According to Triebernig, “This is where we use every resource available to give the big banks the opportunity to do the right thing for their own customers,” he says. Consumers can get involved by simply subscribing to the Banking Bad channel on YouTube at http://www.youtube.com/user/BankingBad. Users can stay updated on future episodes and further bank antics. Alternatively, Banking Bad updates can be found on Facebook and Twitter, respectively, under the name Banking Bad. Users can share the YouTube video and other Banking Bad social media posting to help put an end to big bank customer abuse.

De Veau Dunn created BankingBad™ after a very strange situation where Bank of America requested a death certificate as part of the loan package to complete a refinance on his loan. Dunn was the only person on the loan and had applied on his own, “so that would have been impossible at the time of my application,” joked Dunn. The story of the Bank of America “death certificate” request was featured in Bloomberg’s Businessweek along with the first Banking Bad video titled “Bank of America Wants you to Die…” When asked about creating the Banking Bad network and Bank Complaint forum, Dunn replied, “I chose to fight what appears to be an outrages and correctable circumstances, if we shine some light on these issues in a peaceful and creative way, I hope that it will illuminate these problems and help get them resolved in a diplomatic manner. I would like to encourage the banks to provide better customer service, there are many of us watching on social media.” For more information on Banking Bad, Steve Triebernig, and the fight for homeowner advocacy, visit http://www.BankingBad.com/.

About Banking Bad
Banking Bad is dedicated to educating and informing the masses of outstanding or immoral activities by banking institutions.

About Steve Triebernig
Steve Triebernig helps consumers understand how homeowners can use social media to prevent large corporations from taking advantage of them. He is a simple man with a big dream: to one day rid the world of corporate injustice.