Better Energy Ideas (B.E.I) and the Hyatt Regency Century Plaza recently partnered on a project to add tinted window films to the hotel in an effort to reduce costs, save energy and increase safety. The resulting project saved the hotel over $600,000 annually and helped curb hotel's carbon footprint. 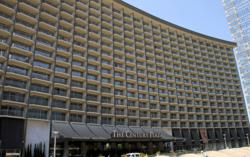 "This is one situation where doing the right thing for the environment, and making a green investment, will cut costs instead of increasing them."

The Hyatt Century Plaza near Beverly Hills recently discovered that a little window film could generate significant energy savings. In partnership with Better Energy Ideas Inc., a company based in Rancho Cucamonga, the Hyatt evaluated the possibility of using window tint to lower their energy costs and reduce their carbon footprint. An initial energy analysis was preformed that indicated the Hyatt Century Plaza could achieve an annual energy savings of over $690,000 using a tinted window film that blocked 99% of UV light while preserving the charm of this historic hotel.

An additional rebate for the project was provided by the Department of Water and Power that exceeded $100K and allowed the Hyatt Century Plaza to achieve a full return on investment in less than six months. Better Energy Ideas Inc. provided the initial consultation and energy analysis as well as project management throughout the installation of film on more than 720 guest windows. Scott Allen, the Hyatt Century Plaza's general manager commented that it the window tinting was "an easy choice after looking at a lot of different products." He went on to say that "it was a nice easy install" that provided a "sleek look for the hotel" and provided significant cost savings. The window film also provides security and safety benefits that prevent the glass from shattering after impact. This was a key consideration for the Hyatt Century Plaza which provides private balconies for guests.

Window tinting is common in Southern California vehicles but few business owners, or property managers, realize the tremendous benefits the same window treatments can have to energy costs. In addition to reducing annual energy costs at the Century Plaza by over $690,000, the hotel also saved over 5 million kWh of energy annually and reduced greenhouse gas emissions comparable to removing 325 cars every year. Effective May 31st of 2014, window film will be required as part of the State Building Code as a result of a landmark vote by the California Energy Commission.

Caroline Bettis, the CEO and President of Better Energy Ideas, stated that "This project at the Hyatt Century Plaza is a perfect example of why organizations need to consider tinted window films as a part of their corporate social responsibility goals." She continued to say that "This is one situation where doing the right thing for the environment, and making a green investment, will cut costs instead of increasing them."