Dog Owner Allegedly Did Nothing as Pit Bull Mauled Toddler to Death: Bisnar | Chase Injury Attorney Comments on an Incident that has Outraged a Town

A Texas toddler was mauled to death by a pit bull after the child stepped into his neighbor's yard to retrieve a balloon that had flown away. According to a Feb. 19 Fox news report, the boy's parents say that they saw the neighbor stand by and do nothing as the boy was brutally attacked by his dog. 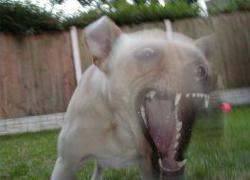 Dog bites can cause serious injury or even death, especially in children who have no ability to fight off an aggressive dog.

Being a responsible dog owner means making sure that your pet is properly trained so it doesn't present a danger to the community. Dog owners should also carry adequate liability insurance so injured victims are not saddled with the costs.

Isaiah Ray Aguilar, a 2-year-old boy, was fatally attacked by a neighbor's pit bull when he chased a balloon into his neighbor's front yard. According to a Feb. 19 Fox News report, the boy was playing with his brother in the front yard of his home when the balloon blew into the neighbor's yard and into the path of a chained pit bull. The dog attacked the boy who screamed out for help as his relatives and the dog owner looked on, the report states. While Isaiah's family ran toward him and another neighbor administered CPR, a Kens5 report quotes family members as saying that the dog owner shook his head and went indoors without taking any action.

"This was a brutal dog attack that should cause outrage in the community and draw the attention of city officials", said John Bisnar, founder of the Bisnar | Chase personal injury law firm.

"It is time for the city to look into whether their laws and ordinances protect all of their residents. Is it sufficient for dog owners to tether their dogs or should dogs, especially ones that have propensity to attack, be secured in an enclosure so they don't pose a danger to the public? There are important questions to be answered here."

"There is no question that dog owners are responsible for their pets and the actions of their pets", Bisnar said. "Being a responsible dog owner means making sure that your pet is properly trained so it doesn't present a danger to the community. Dogs must be spayed and neutered. Dog owners should also carry adequate liability insurance so injured victims are not saddled with the expenses. Responsible dog ownership is the key to preventing these types of heartbreaking tragedies."

"Children are especially prone to dog bites since any sudden moves towards an unstable dog could trigger a bite or attack. Most dog bites are from fearful and unstable dogs and people need to take precautions to protect their children, especially if they know there is an aggressive dog in their neighborhood.

"Dog owners, especially those who own large breeds, need to take extra steps to ensure that their dogs are on-leash or fenced for both the dog's safety as well as other people. If a dog bite's in a state such as California, the owner is responsible. Since larger breeds tend to cause more damage from a bite than smaller breeds, the owners need to be more diligent in proper training."

Bisnar | Chase represents injured victims of dog attacks and their families. The firm has been featured on a number of popular media outlets including Newsweek, Fox, NBC, and ABC and is known for its passionate pursuit of results for their clients.