On 21 February, a concert was held in Paris to commemorate the victims of the Khojaly Massacre, who lost their lives during the Armenian-Azerbaijani conflict over Nagorno-Karabakh. The concert was organised by The European Azerbaijan Society. 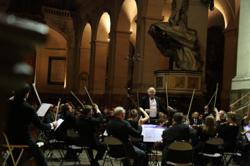 The Orion Orchestra, under the baton of Laurent Petitgirard, perform Pierre Thilloy's 'Khojaly 613'

One has to forgive in order to be able to rebuild peace, but one should never forget.

About 350 Senators, National Assembly Members, Ambassadors and music-lovers attended the Khojaly Commemoration Concert on 21 February at the Baroque Église St-Roch in Paris, located in the first arrondissement. The concert was organised by the French office of The European Azerbaijan Society (TEAS) in order to commemorate the 613 civilians killed on 26 February 1992 in the Azerbaijani town of Khojaly, Nagorno-Karabakh, when it was forcibly occupied by Armenian armed forces, supported by the No. 366 Soviet Infantry Regiment. The evening featured the London-based Orion Orchestra under the baton of the leading conductor and composer Laurent Petitgirard.

The centrepiece of the evening was the world première of a moving new piece, Khojaly 613, composed by Pierre Thilloy, dedicated to the victims of the Khojaly tragedy. The work was written for violin, balaban, percussion and string orchestra. Featured was the evocative sound of the balaban, an Azerbaijani wind instrument, performed by the internationally-acclaimed virtuoso Shirzad Fataliyev. The violinist was Sabina Rakcheyeva, the first Azerbaijani graduate from the Juilliard School in New York and Cultural Advisor, TEAS.

This outstanding work ably captured the horror of the Khojaly Massacre, featuring Azerbaijani folk tunes, including Lachin and Sari Gelin, set against a rich orchestral backdrop of military march rhythms and the sounds of conflict. The violin and balaban – which has a plaintive quality, akin to the human voice – represented the soul of the Azerbaijani people that fateful night, with the violin solo section gradually reaching a furious tempo until coming to a sudden, unexpected halt.

Writing about the piece, the composer said: “The Khojaly Massacre ranks amongst one of the most vivid and nightmarish visions in the collective memory of the Azerbaijani people, stemming from the dark, insidious Nagorno-Karabakh conflict that continues to harm an entire people.

“There is a mechanism, commonly called ‘memory’, which, far from providing vulgar pathos, is a bulwark against oblivion, and operates as a timeless sentinel of dignity. ‘Memory’ has always been a creative banner for composers and artists, who, beyond any political or revolutionary context, are able to remind others of milestones, troubled moments, and dramas, which touch the very depths of their soul.”

Eliza Pieter, Head, TEAS France commented: “One has to forgive in order to be able to rebuild peace, but one should never forget. It is imperative to remember, without having the desire for revenge. This has been achieved by the people of France and Germany in order to restore peace. Surely music is the best way of remembering the Khojaly victims?”

The programme also included the Nizami Symphony by the Azerbaijani composer Fikret Amirov (1922–84), which was inspired by the work of the 12th century Azerbaijani poet Nizami Ganjavi. This piece demonstrated his synthesis of western classical techniques and glorious, passionate Azerbaijani mugham, known as ‘symphonic mugham’. It is generally acknowledged that mugham music originated in the Nagorno-Karabakh region, which remains occupied by Armenia. This ongoing occupation has caused the camps housing 875,000 internally displaced persons (IDPs) and refugees to be spread across Azerbaijan.

This emotional evening also included Sir Edward Elgar’s elegiac Introduction and Allegro for Strings, a multilayered symphonic poem, featuring polyphonic interwoven themes and a fragment of a Welsh traditional song. As an encore, the string orchestra performed a piece of meditative music by Laurent Petitgirard, written for a section of the film Ecrire contre l'oubli (Lest We Forget).

This beautiful music and evocative setting had an undeniable impact on all those in attendance, making them aware of the terrible events of 21 years ago, and of the ongoing plight of the Azerbaijanis who remain unable to return to their homes and lands.