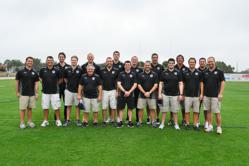 I continue to be impressed by the level of talent that attend our Super Camps as well as our ever expanding network of expert kicking game coaches from all over. NCS Founder Michael Husted.

"There was amazing talent at Super Camp VII this year,” says kicking coach Husted. “Several specialists in all grade years from all over the country impressed our coaching staff. From the instructional groups, evaluation charting to the Head 2 Head tournament, several people performed extremely well and stepped up their game when put under pressure.”

“I continue to be impressed by the level of talent that attend our Super Camps as well as our ever expanding network of expert kicking game coaches from all over,” says Husted. “The opportunity to share resources with one another, as well as to collectively watch all of the talent, provides for a top notch camp."

Husted said Super Camp VII not only provided great instruction for the kickers, but also included a number of other kicking related activities for both parent and the kickers.

Along with two days of instruction and charting, Super Camp VII included multiple seminars for parents and kickers on how to leverage their sport for a college education; a Saturday Evening Social (which over 200 parents attended with their sons); the opportunity to meet with NFL kicker Billy Cundiff as he announced the launch of his new foundation which will support cancer research; and the chance to hang out with autistic kicker Anthony Starego.

“We added the Saturday Evening Social as a way for parents to have an opportunity to spend time with both the coaches and other parents,” says Husted. “At the end of the evening, many parents told me they truly appreciated having that ‘one on one’ time, off the field, with other parents and the coaches.”

Husted said the Saturday Evening Social will certainly be a part of future NCS Super Camps.

Super Camp VII ended with the announcement of the Head 2 Head Winners.

Husted says he will soon be announcing the addition of NCS Divisional Camps to the NCS camp schedule.

Go here for more information about the National Camp Series.