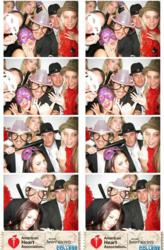 As fun as these events are every year, having the photo booth there just made it that much more enjoyable.

With over 40 years of successful charity events in Miami, The American Heart Association held their 45th annual Miami Heart & Stroke Ball at the beautiful Intercontinental Hotel Miami on Saturday, March 2nd, 2013, without a hitch. A big portion of the entertainment was provided by a photo booth rental supplied by Peekaboo Photo Booth, headquartered in Winter Park, Florida.

Over 400 guests cycled through the booth throughout the night as they rummaged through the bin full of costume options. Once the booth opened, it never saw a break as hundreds of pictures were taken during the event. “As fun as these events are every year, having the photo booth there just made it that much more enjoyable”, stated Steve Lyman from Miami, FL. “Such a cool idea, and the quality of the pictures is pretty awesome!”

Andrew Birr, owner of Peekaboo Photobooth, states, “As much as this event means to the community in Miami and all around, it is an honor to be a part of it. We look forward to being a part of this event every year.”

About Peekaboo Photo Booth
With more than five years of experience, Peekaboo Photo Booth (http://www.peekaboophotobooth.com/orlando-photo-booth-rental/) has completed more than 1,000 successful events. The company offers classy, cabana-style booths that are easy to set up and simple to use. Based in Winter Park, Fla., Peekaboo Photo Booth is a privately owned firm that offers services nationwide. In addition to operating in the Orlando area, the company also has a presence in the following metropolitan areas: Phoenix, Miami, Los Angeles, San Francisco, San Diego, Houston, Dallas, Washington D.C., Philadelphia, Boston, Atlanta, Seattle, Chicago, and Detroit. Peekaboo Photo Booth has been in the Photo Booth Rental Business for over 5 years and celebrates a nationwide footprint servicing both private and corporate events.