Water damage claims from accidental fire sprinkler activations hurt the bottom line of insurance companies and increase the premiums of property owners. Shutgun, an innovative Fire Sprinkler Deactivation Tool, was designed to shut off the activated sprinkler head quickly, isolating the source of water and avoiding these headaches. 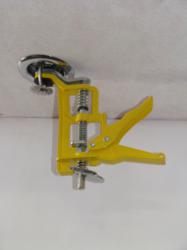 It only makes sense, as the insurance companies will be the ones to save money in the long run

“A fire sprinkler head that is activated and not immediately shut off can easily cause tens of thousands to hundreds of thousands of dollars in damage,” said Greg Patterson, President of Technicraft Product Design Inc. and inventor of Shutgun. “If the damage exceeds a property’s deductable, usually $2,500 – it’s the insurance company who will be paying that out of their pocket, and property owners will watch their premiums rise.”

Ross Humphry is President of Canadian Safety Equipment, Shutgun’s leading distributor in Canada. His reps have sold cases of the tool across the country to hotels, military bases, fire departments and hospitals. “I would encourage Canadian insurance companies to offer incentives to building owners that have a Shutgun on every floor,” he says. “It only makes sense, as the insurance companies will be the ones to save money in the long run.”

With water from a sprinkler head releasing at flow rates exceeding 25 gallons per minute, mere minutes can mean the difference between a single room being out of operation for a few days to multiple rooms on many floors being unavailable for weeks.

Joe Fisco of Petra Risk Solutions in California says, “The bottom line is that water damage is costly and this tool can greatly reduce the amount of money that gets paid out in water damage claims.” Fisco is an advocate for Shutgun in the hotel industry and continues by saying, “It also means time and resources saved by fire departments that are called on scene to shut off a building’s water source.”

Both Patterson and Humphry have met with representatives in the insurance industry about offering a credit to property owners who keep a Shutgun with every fire extinguisher, and have been met with positive response.

-30-
Conceived by a Toronto District Fire Chief of 35 years, Shutgun provides property managers and emergency responders with a one-handed, easy-to-use fire sprinkler shut off tool. Shutgun avoids shutting off the main water supply to the sprinkler system, thus giving continued fire protection. A fusible link provides fire protection by melting and releasing the tool in the event of a fire thus reactivating the sprinkler. Shutgun shuts off most types of sprinkler heads including the semi-recessed style now popular in commercial complexes. http://www.shutgun.ca