A partnership between actor/producer Kirk Cameron and Liberty University was announced Monday night during "Praise the Lord" on TBN, hosted by Cameron and featuring Chancellor Jerry Falwell, Jr. as a special guest. 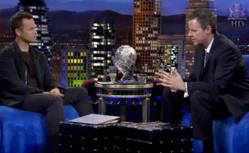 A partnership between actor/producer Kirk Cameron and Liberty University was announced Monday night during “Praise the Lord” on TBN, hosted by Cameron and featuring Chancellor Jerry Falwell, Jr. as a special guest.

The university will partner with Cameron in his new film releasing later this year. The film will answer life’s toughest questions about human suffering.

Cameron, who first visited Liberty as a Convocation speaker last fall and returned last month to meet with film school students, said his goals match up with Liberty’s.

Falwell commended Cameron for his work on the film.

“You’re using your platform as an actor to answer those questions, because I think there are so many young people who will listen to you, who will watch the new movie you’re making that wouldn’t go to church, that wouldn’t sit in a Christian school classroom,” Falwell said. “I think you’re touching people who can’t be reached any other way … that’s why we decided to help you with it. We’re just so impressed and proud of what you’re doing that we want to help.”
Cameron said the film will answer “the kind of questions that can wreck people’s faith,” and Liberty is the perfect partner in the endeavor.

“You have such a strong philosophy department, religion department, seminary, so I know that by partnering with Liberty, you can back up a 90-minute film with classes, and worldview teaching that will send people out in the world who can answer these questions. The truth is nobody else can answer that but the church.”

He said he was also excited to learn Liberty had a new film school, with state-of-the-art equipment.

“You’ve got a full-blown film school that blows away most post-production and film production facilities. I’ve been there; you’ve got mixing equipment, and you’ve got sound stages, and you’ve got theaters and you’ve got cameras that people drool over having. If you’re a film student and you’re looking for a university to go to to break into Hollywood without losing your soul, Liberty University is the place you need to look to.”

The interview also focused on the continued blessings at Liberty — the world’s largest Christian university and the seventh largest university in the nation — as well as Falwell’s experience growing up hearing his father’s vision and then seeing it fulfilled, and how God has prepared him for the work he is doing now.

Falwell called Cameron “an example of the type of graduate that Liberty is trying to turn out.”
“You’re using your profession to impact the culture, and that’s what we’re trying to do in every profession,” Falwell said. “So that’s why we decided to partner with you on your newest project. We’re trying to create tens of thousands of Kirk Camerons and put them out there.”

The program was taped last week at TBN headquarters in Costa Mesa, Calif. The two-hour show often features celebrity guests and popular religious leaders. It has aired each weeknight for more than 30 years. TBN is the world's largest Christian television outreach, with more than 20 international networks reaching every major continent and more than 18,000 television and cable affiliates worldwide.