CAST Lighting announces today that Architectural SSL, a leading LED publication for lighting designers and architects, has awarded the company with two Product Innovation Awards (PIA 2013). One award is for the CAST LED Perimeter Fence Lighting System, and the other is for the CAST Lighting website for its outstanding offerings to professionals and end users. 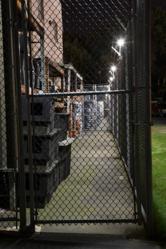 The CAST LED Perimeter Lighting System was introduced in mid-2012 and garnered significant interest in the lighting, security, and facility industries because it offered a low-cost, energy-efficient solution for the illumination of long perimeter fences. Prior to the introduction of the new fence lighting system, perimeter lighting often wasted energy, contributed to light pollution and light trespass, and was often cost-prohibitive.

The innovations introduced with the CAST system are small energy-efficient lighting fixtures that attach directly to the fence. Powered by a safe low-voltage current, these fixtures are not only fast to install, the connecting wires attach to the fence thereby eliminating the need for costly excavation (typically needed for tall-pole-mounted perimeter lighting). An 11-minute video demonstrating the fence installation technique is hosted on the company's YouTube channel.

Since its introduction, the CAST LED Perimeter Fence Lighting System has been specified or installed in a wide range of property types. These include secure data centers, military bases, oil and gas pipelines, communication facilities, mines, warehouses, and transportation depots.

David Beausoleil, founder and president of CAST Lighting, recently hosted an intensive webinar on the science behind the new CAST system. The webinar also featured case studies and was attended by over 300 security and lighting professionals throughout the world. A recording of the LED Perimeter Lighting Webinar is avalable for download from the CAST Lighting website.

In his introduction, Beausoleil said, "The invention of LED lighting made this system possible, and understanding the science behind LED's puts professionals in a place where they can realize the full benefits of LED systems like ours - both for their businesses and the clients they serve."

This successful webinar is the second mass-education event sponsored by the company. The previous webinar on LED Technology was attended by over 1,500 lighting professionals and continues to be a popular download from CAST Lighting's website.

Steve Parrott, CAST's Communication and Marketing Director, commented on the company's commitment to education, "As a company that continues to push the lighting technology envelope, we understand the need to educate our customers, and devote considerable resources to generate and publish articles, white papers, and technical documents. We are also unique in the industry in that we have close relationships with many of the industry's top designers and specifiers. Our customers know we listen and are enthusiastic about maintaining an ongoing dialogue with decision-makers in the company."

The second award given by the Architectural SSL Committee acknowledges CAST Lighting's commitment to education - A "Market Leadership Award for Outstanding Website". The judges note the "enormous amount of educational material for both pros and end users". They also point out the photo gallery that showcases the work of over 50 of the nation's top lighting designers that use the CAST Lighting products.