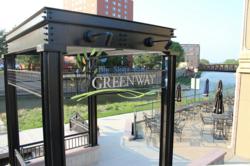 Confluence was selected by the City of Sioux Falls, South Dakota to update the city’s Greenway & Riverfront Master Plan and prepare a feasibility study for a portion of the River Greenway located within downtown Sioux Falls. The purpose of this project is to improve greenway access for recreational opportunities, serving as a catalyst for private redevelopment adjacent to the greenway. Confluence worked with public and private stakeholders, including representatives of three major redevelopment projects, to identify issues and build consensus. Confluence also facilitated an extensive permitting process to assure the project would not have a negative flood impact on property in the area.

Upon acceptance of the refined master plan, Confluence was retained to begin Phase One design implementation. This phase of the Downtown River Greenway project creates an urban river walk on the east bank. A small gathering space is the focal point of the project and consists of an arc shaped stone wall projecting into the river. An amphitheater for small events is flanked on both sides by a stepped river edge which provides an informal sitting area and encourages access to the water. Interpretive light piers create night interest and include panels to educate visitors about the history of downtown and the river.

A new 200-foot single span pedestrian bridge replaced an old railroad bridge that impeded river flow during flood events. This new bridge completes a pathway from the emerging East Bank shopping district to Falls Park West and also serves as a bypass trail for use during large events. Access to the bike trail was improved through two new ADA compliant ramps and two new stairways. In response to requests made during the community involvement process, a canoe and kayak landing was incorporated to serve the large number of boaters in the area.

The history of Sioux Falls revolves around the cascades of the Big Sioux River which exposed underlying Sioux quartzite, a hard pinkish-colored stone. Local quartzite stone is an important element to relate to the historic downtown context while also complementing the natural stone outcroppings visible on the site. This material was used to construct the center amphitheater and is incorporated as an accent throughout the project.

Confluence is now involved in the second phase of the River Greenway project which includes river walls, improved greenway access, seating, a widened trail, and landscaping and irrigation improvements. This project will also incorporate a stepped river edge similar to Phase One and a water feature. Construction is underway with a tentative completion of June 2013.

For more information about this project, please contact Jon Jacobson at jjacobson(at)thinkconfluence(dot)com.