The Imprelis settlement reached in the class action tree damage lawsuit offers compensation for tree damage, as determined by DuPont, but may be lacking in sufficient compensation for other damage and financial losses allegedly caused by Imprelis, states Wright & Schulte. While a hearing will be held in September 2013 for the Court to determine whether to approve the settlement, plaintiffs who are unhappy with DuPont’s offer and who wish to pursue their own Imprelis lawsuits can opt out of the settlement by June 2013. 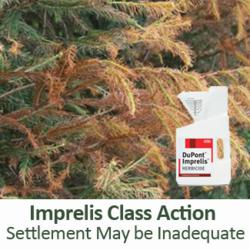 For a free Imprelis claims consultation concerning the class action settlement, your rights, how to opt out , or other questions contact Wright & Schulte 1-800-399-0795 or visit www.yourlegalhelp.com

For a free Imprelis claims consultation concerning the class action settlement, your rights, how to opt out , or other questions contact Wright & Schulte 1-800-399-0795 or visit www.yourlegalhelp.com

The terms of the Imprelis Claims Resolution achieved in an Imprelis class action lawsuit alleging serious Imprelis tree damage claims have been released, and the Court will decide in September 2013 whether to approve or reject this settlement. As part of this Imprelis settlement, DuPont has agreed to compensate plaintiffs according to whether they are property owners, lawn care professionals or “self-applicators” (such as golf courses) and according to the level of Imprelis tree damage claims allegedly caused by Imprelis use, according to DuPont’s assessment. (In re Imprelis Herbicide Marketing, Sales Practices and Products Liability Litigation, Case No. 11-md-2284)
[.bloomberg.com/news/2013-02-12/dupont-wins-approval-for-accord-that-imprelis-kills-trees.html]

Despite this offer for compensation, however, DuPont’s Imprelis settlement may fall short of properly compensating plaintiffs for the value of their damaged trees, the costs of re-planting and re-surfacing and the potential loss in property value allegedly associated with Imprelis use, states Wright & Schulte. In fact, should DuPont not deem certain trees to be sufficiently damaged, it will not offer compensation for them; similarly, DuPont will likely not compensate plaintiffs for alleged Imprelis damage sustained by other brush or vegetation nor for potential future Imprelis tree damage (as the long-term effects of Imprelis damage are unknown, Imprelis tree damage may allegedly persist for years to come). Those who see DuPont’s Imprelis settlement offer as inadequate may opt out of the settlement by June 2013 and pursue their own Imprelis lawsuit for damages.
[epa.gov/pesticides/regulating/imprelis.html ]
[articles.chicagotribune.com/2012-08-29/business/ct-biz-0828-problem-tortorello-20120829_1_imprelis-spruce-and-white-pine-herbicide]

Richard Schulte, a partner with Wright & Schulte LLC, states that the Imprelis settlement offers made by DuPont do not offer proper compensation for the amount of damage allegedly caused by use of Imprelis. “None of our clients are participating in the settlements because the offers are inadequate,” stated Mr. Schulte.
[dispatch.com/content/stories/local/2012/09/29/when-will-dupont-pay-up.html]
[articles.chicagotribune.com/2012-08-29/business/ct-biz-0828-problem-tortorello-20120829_1_imprelis-spruce-and-white-pine-herbicide]

Wright & Schulte, LLC defends the rights of those who have suffered damages and losses after the use of dangerous products and our experienced Imprelis attorneys have a proven track record of successfully going up against large corporations. We urge individuals who have allegedly lost trees, shrubs and other plant life due to the application of Imprelis to speak with our product liability lawyers by visiting yourlegalhelp.com or by calling 1-800-399-0795.
[extension.psu.edu/greenindustry/news/2012/imprelis-damage-continues-in-2012 ]
[msue.anr.msu.edu/news/tree_damage_from_imprelis_one_year_later ]

Reports of Imprelis Tree Damage Triggers EPA Action
DuPont initially marketed Imprelis in October 2010 as a safe and effective way to get rid of the roots of hard-to-kill weeds without presenting any negative impact on surrounding trees and plant life. Despite the fact that advertising for Imprelis touted it as the “most advanced turf herbicide in over 40 years,” lawn care professionals have described Imprelis, which is four times more powerful than Agent Orange, as the industry’s “Hurricane Katrina.” Currently, the full extent of the damage DuPont’s Imprelis has allegedly caused is still unknown.
[businessweek.com/news/2011-07-15/dupont-sued-by-michigan-polo-club-over-imprelis-herbicide.html]
[.epa.gov/pesticides/regulating/imprelis.html]

In June 2011, the EPA started its own investigation into the alleged dangers associated with Imprelis as consumers across the U.S. had been reporting Imprelis tree damage. By August 2011, the EPA had uncovered sufficient evidence that Imprelis was responsible for seriously damaging or killing thousands of trees and, as a result, ordered DuPont to immediately stop selling and distributing Imprelis herbicide. At that time, the EPA had received more than 7,000 reports of Imprelis tree damage from consumers nationwide.
[epa.gov/compliance/resources/cases/civil/fifra/dupontimprelis.html]