After multiple successful global tours, the award-winning documentary film How I Became an Elephant, is being released internationally through iTunes, Google Play, Distrify, and Amazon via streaming rental, download to own, and DVD sales. 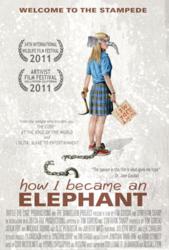 Movie poster for "How I Became an Elephant"

The film promises to be a paradigm shifting experience for global audiences as it reveals the 'true' source of the suffering with the mission to save a threatened species.

After multiple successful global tours, the award-winning documentary film How I Became an Elephant is being released internationally. The film is directed by 16-time award-winning filmmakers Tim Gorski and Synthian Sharp, produced by television actor/producer Jorja Fox, David Reuben and Alec Pedersen and starring Juliette West, and a musical score by Cody Westheimer supported by internationally acclaimed Xavier Rudd, and Tori Amos. The much anticipated film will be released worldwide through iTunes, Google Play, Distrify, and Amazon. From streaming rental, download to own, and DVD sales beginning on April 23, 2013, this vast distribution network will enable the film’s message to reach audiences everywhere.

Since the film’s release, How I Became an Elephant has won nearly a dozen industry awards and accolades, including the recent River Quest Award at the 2012 Silent River Film Festival, Best Director at the First Glance Film Festival and winner of the Animal Filmmaker Award at the Ft. Lauderdale International Film Festival.

How far would someone go…on a mission...to rescue a giant…become an elephant…and join the stampede to make a difference?

SYNOPSIS - At the age of 14, Juliette is on a mission to save elephants. After single-handedly raising funds, she embarks on a life-altering journey to Southeast Asia to meet and work with her hero, Lek Chailert, known as “The Elephant Lady,” who has risked her life and freedom for more than three decades to protect elephants from illegal trade and abuse. This is the story of two women, one from the East, one from the West, coming together on common ground to save elephants. It's also the coming-of-age story of a passionate young woman joining forces with a wise and experienced animal advocate on an enlightening journey of compassion, action and hope. The message: no matter what your age, your ethnicity, or disposition, no matter what the cause, you can make a difference. The film is one girl’s story that led to a movement that became a comprehensive plan…to save a species.

“The film promises to be a paradigm shifting experience for global audiences as it reveals the 'true' source of the suffering with the mission to save a threatened species,” said the film’s director and animal rights activist, Tim Gorski. “As filmmakers, conservationists and humanitarians, we are compelled to tell this story to motivate audiences to join a movement to save the dwindling wild animal population and stop the use of elephants in entertainment, such as elephant trekking and in circus performances. Through mainstream distribution, we are working to achieve our goal of saving this great species,” he added.

Film star Juliette West of the gripping documentary, How I Became an Elephant

A movement to save a species - How I Became an Elephant