Ultracapacitor Manufacturer Skeleton Technologies Raises €2,2 Million in Round A Financing

Skeleton Technologies, manufacturer of next generation ultracapacitors, increases production capacity fuelled by a disruptive competitive advantage and €2,2 million investment round. 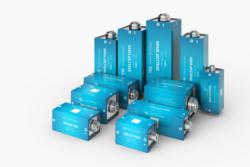 Skeleton Technologies, manufacturer of industry-disrupting ultracapacitors, which have four times higher power densities and up to two times higher energy densities than the closest competitors, closes a €2.2 million Round A financing lead by Up Invest, an Estonian private equity investor.

The financing will be used to meet increasing demand for high performance energy storage solutions. SkelCap ultracapacitors, which have a power density of 80 kW/L and energy density of 14 Wh/L, represent the single biggest increase in ultracapacitor performance of the last two decades.

‘The competitive advantage not only enables to upgrade a variety of energy storage solutions by replacing our competitors’ products, but also pushes the boundaries and creates a market for novel applications in the space and defence segment’, Madiberk added.

Skeleton Technologies´ ultracapacitors will solve crucial energy storage problems with a green, environmentally friendly and cost-effective solution by recapturing braking energy and providing peak and back-up power to increase energy efficiency in a variety of applications, ranging from automotive start-stop systems for conserving fuel to windmill pitch control for more efficient renewable energy generation. Ultracapacitors’ ability to release stored energy in a matter of milliseconds and a 99% ultimate efficiency rate with a lifespan of over 20 years and 1 million charge/discharge cycles in a wide temperature range, make them ideal substitutes or complementing devices for batteries.

Margus Linnamäe of UP Invest commented that they had been looking for an investment in energy storage and Skeleton Technologies immediately caught their eye. What set the company apart is the proprietary technology based on carbide-derived carbon, which enables nanotuning the material for superior performance.

According to Linnamäe, Skeleton Technologies’ competitive advantage is two-fold: higher power and energy density allows to use up to two to four times smaller and lighter cells for the same application; this also means less materials being used in manufacturing, which will in perspective translate to cost savings for customers. He added: ‘Skeleton Technologies’ driven management team and unrivalled technological advantage represents a disruptive opportunity in the energy sector’s most viable market segment that will pass the $1 billion threshold next year.’

Skeleton Technologies plans to harness the growing momentum and use the financing to develop the company’s supply-line and global sales and deliveries. ‘With a new R&D location in Tartu, Estonia and manufacturing in Dresden, Germany, Skeleton is well positioned to further develop the technology and start meeting demand for high performance energy storage’, said Oliver Ahlberg, the COO of the company.

Skeleton Technologies is a manufacturer of advanced carbon materials and industry-leading ultracapacitors for use in the automotive, transportation, industrial and renewable energy markets. Skeleton Technologies’ ultracapacitors have two to four times higher energy and power densities than other similar devices on the market and provide crucial peak or back-up power in a variety of applications, ranging from automotive start-stop systems for conserving fuel to windmill pitch control for more efficient renewable energy generation.

Up Invest is a private equity investor that has business interests in various industries including real estate, distribution of medical equipment and supplies, rehabilitation and other medical services, production of probiotic pet food etc. Up Invest has headquarters in Tallinn, Estonia and operations in Estonia and Lithuania.