The largest class of graduates will receive diplomas at the 2013 Commencement. 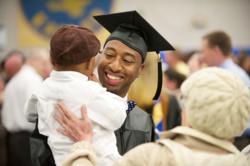 Cornerstone University will confer a record-number of diplomas this year.

Cornerstone University will confer a total of 706 diplomas, the largest amount in the history of the university, during its three commencement ceremonies the first weekend in May.

The class of 2013 will be the largest undergraduate class to graduate with 245. It is the first class during Dr. Joe Stowell’s presidency who has been here the entire four years. He accepted the position in 2008.

The previous high was in 2008 with 240 traditional graduates.

The historic commencement will be held at 10 a.m., May 4 in the Hansen Athletic Center on campus with keynote speaker Dr. Amy Black, associate professor of Political Science and Politics and chair of the International Relations Dept. at Wheaton College in Wheaton, Ill.