F-Plat, Inc. has embedded a translation tool into the meeting system of FAST-MANGA.com, which allows English-speaking clients to easily commission artistic projects to non-English speaking Japanese manga creators and illustrators. This will be the world's first such attempt at a meeting translation tool. 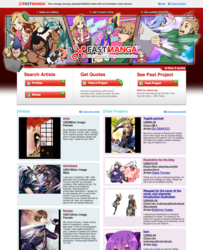 Japanese Artists are now ready for orders from English speakers.

F-Plat, Inc. has developed a way for clients from English-speaking countries to commission Japanese manga and animation creators through a new translation tool on FAST-MANGA.com. This new service will be the world's first attempt to fully automate the translation of transactional messages for artistic creators.

Manga and anime produced by Japanese artists are enjoyed by both men and women of all ages. By using illustrations and manga from Japanese artists on packaging and advertisements, companies can effectively target anime and manga lovers. Illustrations by Japanese manga artists are also great gifts for family or friends who are anime fans. However, it is difficult for English-speaking artists to commission works from Japanese manga artists and illustrators, as many of them speak only Japanese. It was this obstacle that gave F-Plat, Inc. the idea to create a translation tool for FAST-MANGA.com.

A beta version of FAST-MANGA.com was first presented in June 2012. Within the first ten months of introducing this service, there have been about 90 applications from advertising creation companies, game developers, publishers, music labels, and personal creators, mainly from North America and Europe. However, the information received from clients then had to be translated by the company's communicator before the messages and applications could be conveyed to the creators at FASTDESIGN, another service provided by F-Plat, Inc. This method, however, resulted in a limitation in the transaction speed and the amount of bandwidth available for handling the applications simultaneously. With the new integration of a translation service on FAST-MANGA.com, communications can be handled both in multiple languages and at a quicker pace, where clients and creators can conduct one-on-one meetings in the "Project Room.”

In addition, the project content that is submitted by the client during the initial messaging transaction will be translated, free of charge, by the operation head office.

To find out more about this new translation service, please visit http://www.fast-d.com/contents/help/translation

About F-Plat, Inc.
Headquartered in Tokyo, Japan, F-Plat provides three different web services that offer an "Ability Platform," a market where "abilities" such as creative talents, technology, and knowledge can be sold without any linguistic or regional barriers.

Services offered:
FASTDESIGN (fast-d.com): where anybody can easily hire a designer
FAST-MANGA.com (fast-manga.com/): where anybody can hire a Japanese manga artist or animator
Draw Me! (please-draw.me): where customers can order caricatures based on photos taken with their smartphones

Easy 3 steps of FAST-MANGA.comYou can easily find artists, contact them, pay for them online.