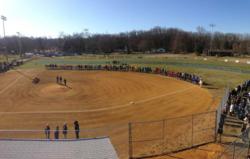 For just under three quarters of a century, Little League Baseball has been a staple in every city and town across America. It grooms the future stars of Major League Baseball and provides a piece of America’s pastime while giving some of our community’s children an introduction into learning core values such as leadership, teamwork, and sportsmanship. Luckily for all of the attendees to opening day in New Egypt, NJ on April 7th, 2013, the celebration included a photo booth rental from Peekaboo Photo Booth to help capture the memories.

Between the ping of the aluminum bats, the dirt kicked up while running from base to base, and the hot dogs being eaten in the bleachers, the photo booth was packed with eager ball players looking to posterize that opening day adrenaline.

Andrew Birr, owner of Peekaboo Photo Booth stated, “It’s amazing how far it’s come…Little League baseball has become so popular that the playoffs and World Series is broadcast on ESPN now. It’s definitely fun to watch and being a part of one city’s opening day ceremony definitely brings back some fond childhood memories. I hope we get to do a lot more of these events”.