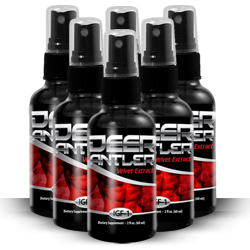 Fortunately for us we are one of the largest providers of Deer Antler Spray,

Shoe Money, otherwise known as Jeremy Schoemaker, mentioned deerantlerspray.com in his article “How Ray Lewis Made Deer Antler Spray ‘Lucky’”. The article suggests that a popular sports news media outlets story on a high profile football athlete has significantly increased the sales of the supplement Deer Antler Spray, making it “lucky”. Shoe Money’s reasoning is that the controversy surrounding the star athlete's possible use of the banned substance popularized the substance and provided free advertisement on a large scale. Though many companies produce the supplement, deerantlerspray.com is the target of Shoe Money’s article. He provides statistics illustrating deerantlerspray.com’s substantial rise in sales just after the story’s release to the public.