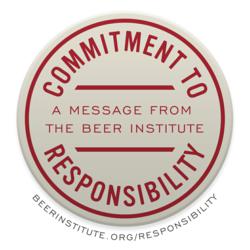 Today, the Beer Institute is recognizing Alcohol Awareness Month and record low drunk driving and underage drinking reports. According to the U.S. Department of Transportation, drunk-driving fatalities have decreased 53 percent since 1982 to a record low. Further, the federal government’s National Survey on Drug Use and Health shows record low levels of underage drinking among 12-17 year-olds.

Brewers and beer importers share a longstanding commitment to reducing the underage drinking rate to zero. And they actively work to promote responsible alcohol consumption among all adults. Beer Institute member companies have invested in hundreds of programs and initiatives to support public safety, education and prevention, including those aimed at combating underage drinking and drunk driving. Details for the programs can be found at http://www.BeerInstitute.org/responsibility.

“As the weather warms up around the country, Americans will come together to enjoy backyard barbeques, holiday parties, graduations and other occasions. America’s brewers and beer importers urge consumers to make smart choices,” said Joe McClain, president of the Beer Institute. “While we recognize there is more work to be done, our members work closely with educators, parents, law enforcement officials and others to ensure that adults are drinking beer responsibly. After all, beer is the right choice for those wanting to moderate their consumption, with 90 percent of all beer measuring in at 4.6 percent ABV or less.”

Efforts being made by brewers and importers include:

More than 30 years ago, Anheuser-Busch launched its first alcohol responsibility campaign, “Know When to Say When.” Since 1990, the Anheuser-Busch Family Talk About Drinking program has helped parents talk with their children about underage drinking, and today offers a parent guide on Facebook to help them match their parenting style with the cognitive development of their children. Through the company’s WE I.D. program, Anheuser-Busch and its nationwide network of wholesalers has distributed tools to help hundreds of thousands of retail accounts serve and sell alcohol responsibly, and post signage to remind consumers they will be asked to show a valid I.D. to purchase alcohol. The Budweiser/Bud Light Good Sport program is an in-stadium designated-driver program that has been implemented with 95 professional sports teams. In-game messages and promotions reward and encourage adults 21 and up to pledge to be a designated driver.

MillerCoors implements a number of drunk driving prevention programs including the sponsorship of public transportation through the Free Rides program, sponsorship of a national cab dispatch service, 1-800-TAXICAB that includes a downloadable app, and designated driver programs across the country. Through programs, an online pledge, and advertising, MillerCoors recently surpassed its goal of being 6 Million Strong Against Drunk Driving early and will now work to engage millions more. The brewer is also committed to preventing underage drinking and partners with the Responsible Retail Forum to enhance the existing skills of retailers through the Respect 21 program, assisting almost 2,000 retailers in keeping alcohol out of the hands of those under the legal drinking age. MillerCoors also partners with organizations like TEAM Coalition and Health Communications, Inc. to provide training to concessionaires, stadium operations staff and servers.

Crown Imports works to include an element of responsible programming in major sponsorships like the U.S. Open of Surfing in Huntington Beach, Calif., which draws over 500,000 spectators, by encouraging consumers to use public transportation to travel around the event and then home safely. Crown Imports also partners with public transportation providers, like the Chicago Transit Authority and the Washington Metropolitan Area Transit Authority, to offer "safe-rides home" over Cinco de Mayo and other holiday time periods.

Additionally, HEINEKEN USA is a founding member of the Health Alliance on Alcohol, a partnership with renowned hospitals that offers free downloadable resources to parents and mentors to encourage talks with teens about alcohol. The program will roll out an updated website, social media activity and new materials later this month.

Furthermore, research continues to demonstrate that by far parents have the most influence on teens’ drinking decisions. Having vital conversations with teens and college-aged young adults can minimize future misuse, according to a study from the University of Pennsylvania.

“Brewers and beer importers support the timeless value of parents talking to their children about making good, safe decisions,” added McClain. “We are all neighbors, parents and friends and should encourage the legal and safe consumption of all beer.”

About the Beer Institute:
The Beer Institute, established in 1986, is the national trade association for the brewing industry, representing both large and small brewers, as well as importers and industry suppliers. The Institute is committed to the development of sound public policy and to the values of civic duty and personal responsibility: http://www.BeerInstitute.org.