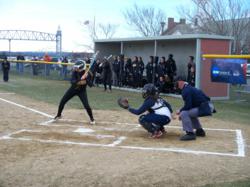 Shea was able to install the dugouts all in one day," Robert Corradi, Mass Maritime's Athletic Director, said. "Don’t wait for a hurricane to knock your dugouts down, order now from Shea and choose precast, you won’t be disappointed.

“This softball field was not there my senior year,” Bougoulas said. “The field was known as the ‘Parade Field,’ every morning, just after sunrise, the entire corp of cadets would muster for the morning roll call. I felt a chill in my bone the day we set the building because I could hear the words I used to shout every morning at that very spot, ‘Regiment, Ten-Hut.’”

Bougoulas graduated from Mass Maritime in 1979 with a BS in Marine Engineering, a Third Engineer Coast Guard License, and was awarded commission as an Ensign in the US Coast Guard Reserve. During his senior year, Bougoulas served as the Regimental Commander, the highest ranking cadet, and played for the Mass Maritime football team.

“I nicknamed him ‘Bou.’ He was as tough as nails when I coached him in football. He is just as wonderful on the field as he is off. It was a coincidence that we ended up working with him,” Corradi said. “The new precast dugouts not only met our expectations, but will last longer and keep our players warmer. They were able to install the dugouts all in one day. Don’t wait for a hurricane to knock your dugouts down, order now from Shea Concrete Products and choose precast, you won’t be disappointed.”

Shea Concrete Products was awarded the Mass Maritime dugouts project at the end of December. Production began in January at Rochester, MA plant. Part of Shea Concrete’s work included submitting a design recommendation and receiving an approval from the MA State Building Code. The dugouts were assembled on March 5th and the entire project was installed and delivered on March 12th, just in time for the the Buccaneers’ season.

“Shea Concrete was chosen to work on this project because Mass Maritime needed a manufacturer who could produce the dugouts quickly and efficiently, before Opening Day,” Bougoulas said. “We were able to deliver the product three days earlier than promised, with plenty of time to spare. It was an uplifting feeling to be able to return to Mass Maritime and work on this project. Just being there brought back old memories. I am so proud to say I went to Mass Maritime, class of 1979.”