Low cost 3D printers have hit the mainstream market full scale and are now one of the most talked about consumer gadgets this year. Invent-A-Part, Inc brings this technology for as low as $355 on Kickstarter. 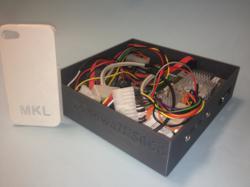 Customize your electronics with 3D printing

Instead of driving to the mall and buying a $30 dollar case for your phone, you can now manufacture one at home for less than $2.00. Low cost 3D printers have hit the mainstream market full scale and are now one of the most talked about consumer gadgets this year. With this same technology many people are building custom computer cases, toys, art and even remote controlled cars and planes.

Invent-A-Part, Inc has recently released the RigidBot 3D printer for as low as $355, finally making this technology affordable to the masses. The RigidBot 3D printer is currently on the popular crowd funding site Kickstarter and has raised over a half a million dollars with over 1200 people pledging for their printer. With 17 days left to go, there is still time to take advantage of the special Kickstarter pricing.

See the RigidBot 3D printer on Kickstarter by clicking here.

It won't be long before everyone has one of these cool gadgets in their own home next to their 2D inkjet printer.