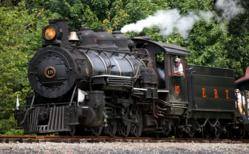 These surviving relics are national treasures from a time of pioneers and patriots ... This list is designed to engage and inspire the public to action.

The NRHS Most At-Risk list, the first in an annual series, is a key element of the organization’s Legacy Initiative, a 12-point program designed to raise public awareness of and coordinate support for threatened railroad artifacts and resources. The NRHS Legacy Initiative is designed to address these concerns by sharing ideas, boosting preservation capacity and presenting a unified voice for the railroad preservation movement.

“As a community of railway historians, preservationists, and enthusiasts, we are the beneficiaries of a profoundly rich legacy. These surviving relics are national treasures from a time of pioneers and patriots,” said Nathaniel Guest, NRHS preservation programs director. “Their preservation is our responsibility to our future generations. This list is designed to engage and inspire the public to action before these treasures are lost forever.”

The eight most endangered railroad landmarks in 2013 are:

Below are detailed descriptions of each railroad landmark and contact information for its respective preservation group. Photographs of each landmark can be viewed by visiting http://www.nrhs.com.

Manufactured in 1919 by the American Locomotive Company in Richmond, VA, Atlantic Coast Line locomotive no. 1504 has significance as one of the few remaining engines constructed under the direction of the United States Railroad Administration; it was designated a National Historic Mechanical Engineering Landmark in 1990. The coal-burning steam engine spent most of its career pulling passenger trains between Richmond and Jacksonville. It has been on display outdoors for over 50 years and is rapidly deteriorating.

Widely considered one of the Southeast’s most important railroad resources, no. 1504 represents the plight of park locomotives across the nation left exposed to the elements, whose maintenance needs outpace the allotted resources. Once restored, the long-term goal is protection from the elements and possible relocation to a more visible site. For more information or to donate, contact the North Florida NRHS Chapter at http://www.nrhs.com/chapters/north-florida or mail the chapter care of President John S. Holmgren at P.O. Box 16493, Jacksonville, FL, 32245-6493.

The Stewartstown Railroad is an example of a farmers' railroad that once served the agricultural and light manufacturing interests of a largely rural area of southern York County. Seven significant railroad structures along the 7.4-mile line have been listed in the National Register of Historic Places and the line itself is eligible for inclusion in the National Register. Freight operations ceased in 1992 and passenger excursion operations ceased in 2004. The railroad still holds its original charter of 1884, never having merged with another railroad or been subject to a corporate reorganization. This is the only such operation to survive to the present day.

The Stewartstown Railroad's long-term survival is threatened by a lien placed against it by a former shareholder. Deferred maintenance, vandalism and the effects of rapid residential and commercial development add to the threat and are concerns shared by rural heritage railroads across the country. Donations can be sent to The Friends of the Stewartstown Railroad, Inc.; visit http://www.stewartstownfriends.org/.

Louisville & Nashville E6A diesel locomotive no. 770 was built in 1942 by the Electro Motive Division of GM. After its inaugural run from Louisville to Nashville, the locomotive regularly powered the road’s flagship passenger trains. Number 770 was retired in 1968 and donated to the Kentucky Railway Museum. One of only two surviving E6A models, no. 770 is the only L&N passenger diesel to be preserved. The rarity of the model, its 70 year-age and distinctive slanted-nose, as well as the historic L&N trains it pulled, qualifies it for the National Register of Historic Places.

The engine is at risk due to outdoor display, where it is exposed to weather and occasional vandalism. Although stored under a train shed and enclosed by fencing, time and elements have taken their toll. An appropriate indoor restoration facility is not available at the museum nor is sufficient funding available. To offer support or make a donation for the locomotive’s stabilization and restoration, contact the Kentucky Railway Museum at http://www.kyrail.org.

Listed on the National Register of Historic Places, the Baltimore and Ohio (B&O) Railroad depot in Duffields, WV, is a significant part of Jefferson County’s transportation and military history. The 1839 depot is believed to be the second oldest train station still standing in the U.S. It was significant in Civil War history as a key supply depot for Union Forces. It retains excellent historic architectural integrity for a building constructed in the early 19th century.

The building is greatly deteriorated from decades of neglect; it was recently purchased by Duffields Station, Inc., a West Virginia non-profit organization that has installed a new roof and begun repointing the stone with the support of state grants. A federal transport grant of $920,000 has been requested to complete the restoration. When completed, the depot will serve as a local museum and meeting venue with historic exhibits. For more information and to make a donation, call Duffields Station at (304) 876-3208 or email aphsr1(a)comcast.net.

A National Historic Landmark—the highest designation available in the United States—the East Broad Top Railroad and Coal Company is the country's oldest narrow gauge railroad. Opened in 1856, the line winds through 31 miles of beautiful mountain scenery and remains virtually intact – including track, steam locomotives, cars and facilities. Also nestled in the remarkably unchanged landscape are villages and towns which sprang up during the early years of operation. The EBT is a virtual time machine documenting the industrial progress of the U.S. during the golden era of steam power.

The railroad suspended operations in 1956 and was purchased by the Kovalchick family, which kept it operational as a tourist line; however, family members no longer wish to operate the line and are considering auction or scrapping. The East Broad Top Preservation Association is working to acquire and preserve the railroad. The cost is $8 million and the EBTPA has received $2 million to date, allowing the purchase of a segment. Time is running out: the remaining $6 million must be raised by the end of 2013. Donations can be sent to EBTPA, PO Box 585, DuBois, PA, 15801, or contact Larry Salone at (814) 946-0834.

In 1910, this elegant Union Station was erected along the Lake Shore & Michigan Southern and Baltimore & Ohio lines through Gary. Beaux Arts style was still in vogue but construction would utilize the latest in 20th Century steel-reinforced poured concrete. Even today the station is structurally sound and the exterior is in remarkable condition. Yet the abandoned structure awaits an uncertain future, located among a maze of elevated railroad mainlines. Vandals, pigeons, and the elements have thoroughly damaged this one time showpiece and its magnificent interior has been stripped. Ceilings are caving in and all windows have been shattered.

Plans to reuse the facility have been in the works for five decades, and time is ticking away. The station has been added to the top 10 most endangered list of the Indiana Historic Landmarks Foundation. The city applied for federal money in 2000 to stabilize the station and begin redevelopment. Interested persons should email letters of support to info(a)indianalandmarks.org.

Built during the “Gothic period” of heavyweight passenger cars, the Lion Gardiner served on the New York Central’s finest trains after World War I and through the 1940s. The Pullman car is an exceptional representative of fine railroad dining during this era. The Lion Gardiner also has an important place in the railroad preservation movement: it was the dining car for “High Iron” excursion trips in the 1960s, which introduced countless rail enthusiasts to the concept of re-using historic railroad equipment for recreation.

The Lion Gardiner has suffered from extreme deterioration for the last three decades. Knowledge of the car’s existence (or significance) was not widespread, due to the lack of a national census of railroad artifacts. Unless action is taken soon, the car’s deterioration will require its scrapping. The Empire State Railway Museum, the Catskill Revitalization Corporation, and the Ulster and Delaware Railroad Historical Society are embarking on a partnership to stabilize, assess, and eventually restore the car for display or operation. To make a donation, visit http://www.esrm.com or mail the Empire State Railway Museum at P.O. Box 455, Phoenicia, NY, 12464-0455 (indicate “Lion Gardiner”).

The Michigan Central Railroad Station was Detroit's main mass transit point of entry, an elaborate structure that was the world's tallest at the time of its 1913 construction. Designed by noted architects Warren & Wetmore (the team that designed New York City's Grand Central Station), its cost surpassed $2.5 million and its design was one of the most elaborate in the nation. Closed in the late 1980s, the station is currently vacant and heavily damaged. It was listed in the Michigan Register of Historic Places in 1974 and in the National Register of Historic Places in 1975.

Exposed to the elements through much of the 1990s, the station has been vandalized. Its plaster and brass details have either been removed by scavengers or damaged by vandals. Currently, discussion has centered on renovating the grand building to host a trade processing center, convention center and casino, Detroit police headquarters and Michigan State police headquarters. For information or to make donations, contact the Michigan Central Station Preservation Society (MCSPS) at MichiganCentral (a) gmail.com or visit http://savemichigancentral.com/media.html.

ABOUT THE NATIONAL RAILWAY HISTORICAL SOCIETY

Founded in 1935, the National Railway Historical Society (NRHS) is a non-profit organization established to preserve and raise awareness of America’s railroad heritage. NRHS operates historic rail excursions and tours throughout North America and supports more than 150 regional chapters. During the past 10 years, the society has awarded more than $500,000 in railroad preservation grants; it also sponsors RailCamp, a summer orientation program offering high school youth hands-on experience in the railroad industry. For more information, visit http://www.nrhs.com.