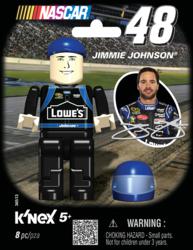 NASCAR: Driver Figure Bags Series #1
The wait for your favorite driver is over! Each figure bag includes one buildable NASCAR driver. Drivers include #88 Dale Earnhardt Jr., #24 Jeff Gordon, #18 Kyle Bush, or #48 Jimmie Johnson, and each figure is compatible with the entire K’NEX NASCAR line of products. Each sold separately, collect them all! Suggested retail price is $2.99. Ages 5+. Available now.

The K’NEX NASCAR Figure Bags will be available on knex.com and at retailers nationwide.

About K’NEX Brands
Founded in 1992, K’NEX Brands, the world’s most innovative construction toy company, was established to make and sell what has become one of the world’s leading integrated construction systems for children and is America’s STEM building solution. Winner of over 250 international awards and recognitions, K’NEX, America’s building toy company, is focused on Building Worlds Kids Love and encourages youngsters to “imagine, build and play.” From the living room to the classroom, K’NEX has building toys specially designed for every age group and skill level. The K’NEX family of brands includes K’NEX Building Sets, K’NEX Thrill Rides, K’NEX Education, Lincoln Logs®, Tinkertoy®, NASCAR®, Angry Birds™, Mario Kart Wii™, Mario Kart 7™, Super Mario™, PacMan™ and more. Since 1992, The Rodon Group, a subsidiary of K'NEX Brands, L.P., has manufactured over 31 billion parts for the K'NEX building toy system. Join us as we help build the leaders of tomorrow. For more information, please visit http://www.knex.com or http://www.rodongroup.com.

About NASCAR
The National Association for Stock Car Auto Racing, Inc. (NASCAR) is the sanctioning body for one of North America's premier sports. NASCAR is the No. 1 spectator sport – with more of the top 20 highest attended sporting events in the U.S. than any other sport, and is the No. 2 rated regular-season sport on television. NASCAR races are broadcast in more than 150 countries and in 20 languages. NASCAR fans are the most brand loyal in all of sports, and as a result more Fortune 500 companies participate in NASCAR than any other sport.