Members of the Texas Nationalist Movement joined others from around the state on Monday in flooding the state capitol with calls indicating their support of legislation establishing the Texas equivalent of Fort Knox. 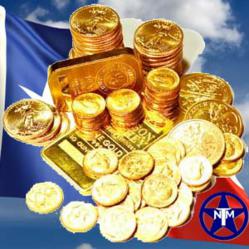 Texas Wants Its Own Fort Knox

The fiscal chickens are coming home to roost. HB 3505 represents an opening salvo in Texas’ fight to regain control of our economic destiny.

Members of the Texas Nationalist Movement joined others from around the state on Monday in flooding the state capitol with calls indicating their support of House Bill 3505 by State Representative Giovanni Capriglione.

The bill, which has drawn a designation as a “legislative priority” of Gov. Rick Perry, would create the Texas Bullion Depository, a state-based bank to house $1 billion worth of gold bars owned by the University of Texas Investment Management Co. and presently stored by the Federal Reserve.

“A key component of the economic mission of the Texas Nationalist Movement is the promotion of monetary policies that support the independence of Texas,” TNM president Daniel Miller said.

The organization sent out social-media and e-mail messages to members urging them to call with their support of the bill, which was scheduled for a hearing Tuesday bu the House Appropriations Committee’s Sub-Committee on Budget Transparency and Reform.

Miller welcomed the hearing, but noted the bill’s progress has, thus far, been slowed by “politics and misplaced priorities.”

“In short, they need to hear from the people that this is a priority. Even with Governor Perry’s very public support of this bill, the process has ground to a halt in the Texas House,” Miller said. “The House leadership are committed to a ‘Casper Milquetoast’ session so that any potential opposition in the next election cycle will have no controversy with which to challenge them.

“As the Federal Government continues to actively attack the sovereignty of Texas and our rights are discarded like yesterday’s garbage, the Legislature is looking to avoid pain now and in the next election,” Miller said. “That’s why it’s important that Texans get the word out immediately that we want our gold back.”

All metals would be redeemable on demand. Fractional Reserve banking would be prohibited as well as all other types of banking or investment with the deposits.

Miller said the most important reason this bill needs to be passed is to reflect Texas’ lack of faith in Washington.

“It’s simple. The fiscal chickens are coming home to roost. It is absolutely no secret that the Federal government and the economic system that they have imposed is on the verge of collapse,” he said. “This bill represents an opening salvo in Texas’ fight to control its own economic destiny.”

“There is a groundswell of support as people wake up and realize that this is our chance to begin re-claiming our sovereignty,” Miller said. “The TNM is committed to leading the charge to break the back of legislative complacency.”

The Texas Nationalist Movement is the largest and oldest organization working for the political, cultural and economic independence of Texas.