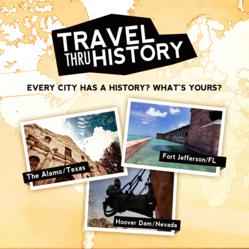 "And to know that a show like ours, funded with the help of friends and family on kickstarter.com, can compete against fully-funded, national television productions is amazing and encouraging for all of us in the field - we’ve proven it’s possible!"

Red 5 Creative, a Longwood (Orlando metro area), Fla.-based television production company, in association with Longwood's Television Syndication Company, are pleased to announce that Travel Thru History, has been nominated for a national Daytime Emmy Award.

Within the vast array of travel-centric programming currently available, Travel Thru History presents viewers, specifically families and young people, with a unique concept that focuses on the historical points of interest found within a destination while teaching viewers about that location’s roots and heritage. This is achieved through visual storytelling and interviews with local historians and experts.

To secure Travel Thru History’s first season of funding, producers Joe Dorsey and John DeMaio identified a novel funding resource, kickstarter.com - an online funding platform tailored to assist in the startup of creative projects. Kickstarter did its job, and Travel Thru History met its goal with the original 13 episodes currently airing on the MeTV network throughout 2013.

"It is extremely rare for an educational show with a small crew like ours to be recognized with a national Daytime Emmy award nomination, but our team endeavored to make it a reality, and we couldn’t be more thrilled," said Dorsey.

Now, the show’s producers are busy creating seven new episodes to air on MeTV along with the original 13, as part of season two. Dorsey and DeMaio are looking to broaden the show’s appeal during the second season by telling the stories of some world-class international destinations as well.

“When we were filming these episodes, we knew we had visually captured a unique perspective of some pretty amazing places giving us the opportunity to a story about these locations from an entirely new point of view. It means a great deal to us that the academy chose to recognize Travel Thru History in the category of Outstanding Achievement in Single Camera Video,” said DeMaio.

Added Dorsey, "And to know that a show like ours, funded with the help of friends and family on kickstarter.com, can compete against fully-funded, national television productions is amazing and encouraging for all of us in the field - we’ve proven it’s possible!"

Said DeMaio, “This nomination validates what we set out to accomplish - to create quality educational content for teens and their families. We are extremely proud.”

Travel Thru History currently broadcasts on the MeTV network. MeTV is a digital station found in 89% of the US, including 28 out of 30 of the nation’s largest markets - via antenna, cable and satellite. Visit http://www.travelthruhistory.tv for more information.

About Red 5 Creative
Red 5 Creative is a full service, television production company that creates, develops, and produces travel series and documentary content for broadcast and the web. http://www.red5.tv