4.2M devices in Q1 ranks second behind Samsung, ahead of ASUS, Amazon 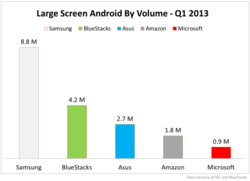 There is so much good content being produced for mobile right now. The ability to take it to other devices is becoming important.

BlueStacks, the company that brings mobile apps to larger screens with its proprietary “LayerCake” technology, announced today that it has surpassed 10 million users. 4.2M of these devices came online in Q1 2013, putting it second behind Samsung and ahead of ASUS and Amazon based on IDC quarterly numbers just released.

“BlueStacks really came out of nowhere over the past year, but I’m not surprised that it’s taking off,” said longtime industry analyst Tim Bajarin. “There is so much good content being produced for mobile right now. The ability to take it to other devices is becoming important.”

BlueStacks launched their “App Player” software for PCs in March, 2012 and added a Mac version in June. The software allows anyone to play any mobile app on a desktop, laptop or Windows tablet. A special version of BlueStacks for the Microsoft Surface was released in February. According to CEO Rosen Sharma, growth has been particularly dynamic in 2013, “We’re seeing exponential gains in adoption and active usage over the past few months especially,” said Sharma. “Now we’re working on this idea of, how we can take this technology and bring mobile content to other types of devices.”

BlueStacks powers devices worldwide in over 100 countries with a large user base across the United States, Europe, Korea, India, China, Japan, Brazil. In addition to downloads from Bluestacks.com, the company’s App Player software is pre-bundled by several large device manufacturers like Lenovo, Asus, MSI and others.

BlueStacks has a very engaged user community with a fast-growing 1.2M fans on Facebook. In addition to top apps like Candy Crush Saga, Jetpack Joyride or Kakao Talk, users consume a very healthy long tail of apps and games. The most popular application categories are casual gaming, messaging and lifestyle apps.

Sharma emphasized the importance of gaming in BlueStacks. “Generation M has grown up with mobile games and expect to enjoy those on all platforms. Gaming has emerged as a strong use case for us.”

To build on the traction the company has gotten far, BlueStacks has received 15 million in venture funding from Andreessen-Horowitz, Qualcomm, Intel, Redpoint, Radar Partners, Ignition Partners, Citrix, AMD and more.

ABOUT BLUESTACKS
BlueStacks was founded in 2009 to bring the energy and creativity of the mobile app world to every type of device. The company is funded with 15M from Intel, Andreessen-Horowitz, Radar Partners, Redpoint, Ignition Partners and Qualcomm. The company’s App Player software has been downloaded over 10 million times. Join their more than 1.2 million Facebook fans at Facebook.com/BlueStacksinc, or on Twitter at @BlueStacksinc