A product launch party held by Trion Worlds gaming company keeps the fun going with a photo booth provided by Peekaboo Photo Booth. The party was held at Humprey’s by the Bay Restaurant. 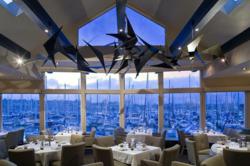 Humphrey’s by the Bay

"I was a gamer when I was younger and after hearing about some of the games Trion Worlds has put out, it might be time to dust off my consoles"

First person shooter…Third person shooter…Online real-time strategy…MMORPG. Those are the types of games that make Trion Worlds a leading video game producer. Their website states that their MMORPG (Massively multiplayer online role-playing game) alone went over one million activations in less than four months and made $100 in revenue in its first year.

Those numbers are astounding which is why when a new product is being launched, you can be sure there will be a celebration to follow. That was the case on Friday, May 3rd, 2013 at Humphrey’s Restaurant in San Diego. Outside of the excitement of releasing a new product, another way they kept the party going was by a photo booth rental provided by Peekaboo Photo Booth.

“I’m familiar with Trion Worlds and all the games they’ve put out and in the past decade or so, they seem to be wildly popular. I also know the gaming industry generates hundreds of billions of dollars each year and being connected with a company that contributes a lot of that revenue is pretty awesome. I was a gamer when I was younger and after hearing about some of the games Trion Worlds has put out, it might be time to dust off my consoles,” smiled Andrew Birr, owner of Peekaboo Photo Booth.