Company closes the 2012-2013 season with the return of this joyful masterpiece. 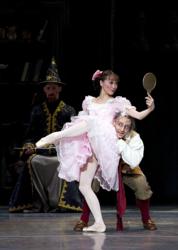 Brimming with delightful characters and intricate choreography, Coppélia is a captivating full-length story ballet that will charm both young and old.

Boston Ballet brings the spring season to a triumphant close with George Balanchine’s jubilant classic, Coppélia. Brimming with delightful characters and intricate choreography, Coppélia is a captivating full-length story ballet that will charm both young and old. The production runs from May 16-26, 2013 at The Boston Opera House.

“We are so thrilled to bring Boston the gift of beauty, spirit, and comedy all in one production,” said Artistic Director Mikko Nissinen. “Coppélia embodies each of these traits, and reminds us that life is meant to contain an abundance of joy.”

George Balanchine’s Coppélia was first presented by Boston Ballet in 2010. The production featured new and refurbished sets and costumes, and was highly acclaimed by critics and audiences alike. Truly a light-hearted comedy, Coppélia is the tale of a life-sized dancing doll created by Doctor Coppélius, the town’s intriguing inventor. This exuberant story becomes a love-triangle full of laughter; beautifully showcasing the musicality of Balanchine’s choreography. Principal dancer Jeffrey Cirio and Soloist Ashley Ellis will make their debuts as the leading roles in the ballet – Frantz and Swanilda.

Originally choreographed by Arthur St. Léon in 1870, the ballet is based on the E.T.A. Hoffman story “Der Sandmann.” It is set to a wondrous score by Léo Delibes and links two monumental ballet periods – the French Romantic style and the Russian Classical style. In 1884, Coppélia was restaged by Marius Petipa, and again by Enrico Cecchetti in 1894. Nearly a century later, Balanchine made Coppélia his own, collaborating with Alexandra Danilova. The two preserved the storyline in Act I & II with fresh choreography, and created an entirely new Act III. Balanchine’s revived classic made its debut with New York City Ballet in 1974 at the Saratoga Performing Arts Center. The iconic Act III village wedding scene features over 20 children, all of which are students of Boston Ballet School.

All performances of Coppélia will take place at The Boston Opera House:

Boston Ballet maintains a repertoire of classical, neo-classical, and contemporary works, ranging from timeless classics such as Marius Petipa’s The Sleeping Beauty and Giselle, John Cranko’s Romeo and Juliet, and a rich collection of Balanchine choreography to cutting edge contemporary works by Resident Choreographer Jorma Elo and the visionary Jiří Kylián.

2012-2013 Season Tickets
Subscriptions for the 2012-2013 season and individual tickets to all ballets are on sale now. Subscriptions and all tickets are available for sale online 24 hours a day at http://www.bostonballet.org or by phone at 617.695.6955 or in person at the box office at 19 Clarendon Street, Boston, Mon–Fri, 9:30am-5pm and on performance days on Sat and Sun, 11am – 4pm. Prices for season ballets start at $29. Tickets to The Nutcracker start at $35. Discounted group tickets (10 or more) are available by calling the box office or the Group Sales Associate at 617.456.6343. Contact the Boston Ballet box office at 617.695.6955 or visit http://www.bostonballet.org for details.

National Endowment for the Arts