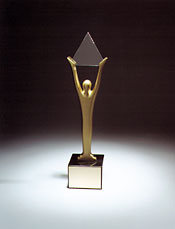 A record number of nominations were submitted this year with more than 3,200 from organizations of all sizes and from virtually every industry.

Finalists were announced today in The 11th Annual American Business Awards. Organizations as diverse as the Chesapeake Bay Foundation, Domino’s Pizza, Heineken USA, Microsoft, the National Football League, Procter & Gamble, Sony, and Wynn Las Vegas are among those recognized. Lists of Finalists by category have been published at http://www.StevieAwards.com/ABA.

The American Business Awards are the nation’s premier business awards program. All organizations and individuals in the U.S.A. are eligible to submit nominations.

This year’s Gold, Silver and Bronze Stevie® Award winners will be announced at two award banquets. The first will take place on June 17 at the Fairmont Millennium Park Hotel in Chicago, Illinois; and the second, with awards in the new product and technology-related categories, will be held on September 16 at the Julia Morgan Ballroom in San Francisco, California. More than 800 executives are expected to attend the events. The ceremonies will be broadcast nationwide by the Business TalkRadio Network.

A record number of nominations were submitted this year with more than 3,200 from organizations of all sizes and from virtually every industry. The ABAs include a wide variety of categories including management awards, new product awards, marketing awards, public relations awards, human resources awards, information technology awards, web site awards, and more.

Finalists were chosen by more than 140 business professionals nationwide during preliminary judging in April and May. Members of nine specialized final judging committees will determine Gold, Silver, and Bronze Stevie Award placements from among Finalists in judging that will begin next week. More than 250 executives will participate in the judging process this year.

For press credentials for the June 17 and September 16 award banquets or for more information, contact liz(at)thestevies(dot)com.