New Ideal Church Of Scientology Blooms In The City Of Roses

On Saturday, May 11, the Church of Scientology Portland celebrated the grand opening of their new home in the city’s historic downtown quarter. More than 2,500 Scientologists and guests joined city and state dignitaries for the dedication ceremony. 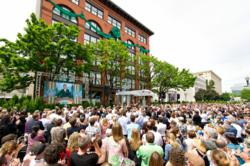 In ceremonies attended by more than 2,500 Scientologists and their guests from across the U.S., the Church of Scientology Portland was dedicated on Saturday, May 11, 2013.

Portland was our test, It was a test of our resolve, our fortitude and determination to avert a grave assault on the First Amendment of the United States Constitution.

On Saturday, May 11, the Church of Scientology Portland celebrated the grand opening of their new home in the city’s historic downtown quarter. More than 2,500 Scientologists and guests joined city and state dignitaries for the dedication ceremony.

The Church’s new home occupies the renowned Sherlock Building on the corner of Third Avenue and Oak Street. Originally erected in 1893, the landmark has long been listed on the National Register of Historic Places. The Sherlock Building is recognized as among the most noteworthy late-19th century structures in Portland and the preeminent example of Sullivanesque-style architecture in Oregon. The Church undertook the restoration of this Portland classic to preserve its heritage well into the next century, including full seismic reinforcement of all seven stories. The building now houses all facilities of a Scientology Ideal Organization (Ideal Org), providing the complete range of religious services to a rapidly growing congregation. The Church further serves as a center for members of all other faiths to collaborate for community betterment across the Willamette Valley.

Portland itself holds a notable place in Scientology history as the site of the 1985 Scientology Religious Freedom Crusade. In a movement that inspired not only Portlanders but also religious advocates world over, tens of thousands of Scientologists united in the city. For some 60 days, they assembled for peaceful marches, concerts and candlelight vigils, which culminated with a landmark legal victory for religious freedom in America.

In recognition of Portland’s new Church, Mr. David Miscavige, Chairman of the Board Religious Technology Center and ecclesiastical leader of the Scientology religion, led the dedication. His inaugural address spoke to the history of Scientology in Portland and specifically the events surrounding a first Scientology Freedom Crusade of 1985:

“Portland was our test,” Mr. Miscavige explained. “It was a test of our resolve, our fortitude and determination to avert a grave assault on the First Amendment of the United States Constitution. So when you look at where we stand today, remember it was all because our voices were heard 28 years ago.”

“In that respect,” he added, “your destiny has always foretold of the day when this Church would become a testament to what originally drew so many thousands to these streets. Namely, that our inherent right to spiritual salvation is intrinsically linked to tolerance, brotherhood and the right of every faith to champion the divinity of humankind. That this Church further stands for drug-free, crime-free, literate, moral and happy lives, is only the beginning; for with a hard-won right of religious freedom comes your responsibility to deliver that long sought goal of total freedom. And so I ask that you now extend your help to all who would dream of such a freedom, so they, too, may realize their destiny.”

In his address, Cornelius City Manager Mr. Rob Drake said: “The Church of Scientology has come to the table time and again for our community. Though downtown Portland has long been your home, your Church has always reached far beyond its boundaries in the name of help. And with your expansive new Church we dedicate here today, I know that this help will extend even further.”

Mr. Les Smith of the Portland Marathon recognized the Church’s Volunteer Ministers and their dedication to the city’s signature event: “Our American culture is based on the spirit of volunteerism. And it is with that same spirit that your volunteers have been showing up at our event for the last twenty years. By being here as long as they have, with their experience and with their understanding of our aims, they are invaluable. So as part of your celebration today, I want to acknowledge your dedicated corps: the world-famed Scientology Volunteer Ministers.”

Ms. Annie Heart, Chair of the Inter-Religious Action Network, spoke to the Church’s long-standing and indiscriminate work on behalf of residents across the state: “You have been a vital partner and leader in the inter-religious community. So thank you to everyone for being here, and for serving our county-wide cities and fostering partnerships and peace throughout our beautiful state of Oregon.”

Reverend Jim Nicholls, host of the national “Voice of Freedom” TV and radio broadcasts, honored Scientologists and addressed all present when proclaiming: “I hope you realize just how brightly the torch of Scientology blazes. I am convinced there is no religion and no organization in the world today that has done more for the fight for our religious freedom rights than the Church of Scientology.”

About The Church Of Scientology Portland

The new 69,000-square-foot Ideal Org provides residents of the Willamette Valley with an introduction to Dianetics and Scientology, beginning with the Public Information Center. Its displays, containing more than 500 films, present the beliefs and practices of the Scientology religion and the life and legacy of Founder L. Ron Hubbard. The Information Center also offers a detailed overview of the many Church-sponsored humanitarian programs—including a worldwide human rights education initiative; an equally far-reaching drug education, prevention and rehabilitation program; a global network of literacy and learning centers; and the Scientology Volunteer Minister program, now comprising the world’s largest independent relief force. The Center is open morning to night for visitors to tour at their leisure and return as often as they wish.

The Church’s Chapel provides for Scientology congregational gatherings, including Sunday Services, Weddings and Naming Ceremonies—as well as a host of community-wide events open to members of all denominations. The new Church further includes multiple seminar rooms and classrooms, in addition to dozens of auditing rooms for Scientology auditing (spiritual counseling).

About The Scientology Ideal Org Program

Through the coming year, more than a dozen new Ideal Orgs are scheduled to open in Australia, New Zealand, Asia, Europe, England, South and North America.

Ideal Orgs reflect the fulfillment of Founder L. Ron Hubbard’s vision for the religion. They not only provide the ideal facilities to service Scientologists on their ascent to greater states of spiritual awareness and freedom, they are also designed to serve as a home for the entire community and a meeting ground of cooperative effort to uplift citizens of all denominations.

The Scientology religion was founded by author and philosopher L. Ron Hubbard. The first Church of Scientology was formed in Los Angeles in 1954 and the religion has expanded to more than 11,000 Churches, Missions and affiliated groups, with millions of members in 167 countries.

The Café welcomes those touring the Church or attending its many scheduled events. It is further provided for parishioners during breaks in their Scientology services.

The atrium rises through five stories at the center of our Church.

The rooftop terrace offers visitors and parishioners alike a panoramic view of downtown Portland and the foothills of the Oregon Cascades beyond.

The Church’s new home is the landmark Sherlock Building, originally constructed in 1893 and listed today on the National Register of Historic Places.

The Church meticulously preserved their new home, the renowned late-19th century Sherlock Building, to guarantee the landmark may serve Portlanders for yet another century.

The ribbon-cutting celebration opened with an inspiring rendition of the “Battle of Portland” Freedom Crusade anthem of 1985.

Mr. David Miscavige, Chairman of the Board Religious Technology Center and ecclesiastical leader of the Scientology religion, spoke to the history of Scientology in Portland

Listed on the National Register of Historic Places, the building is recognized as one of the most noteworthy late-19th century structures in Portland

The new Church of Scientology Ideal Organization stands on Oak Street, at the corner of Third Avenue, in Portland’s historic downtown quarter.

Reception The Church welcomes all visitors wishing to obtain an introduction to Dianetics and Scientology.

The Church contains a permanent exhibit honoring Portland’s notable place in Scientology history as the site of the first Scientology Religious Freedom Crusade.

All Scientology congregational services and ceremonies are convened in the Chapel, including Sunday Services open to members of every denomination.

In addition to providing for Scientology gatherings, the Chapel serves as an ideal venue for banquets, receptions and events in the name of community collaboration for the betterment of Portland.