This exhibition offers our visitors a chance to experience the Eternal City, Rome, through the works of master printmakers across three centuries. 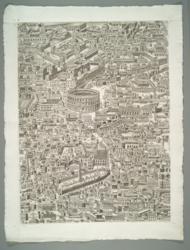 "Antichità, Teatro, Magnificenza: Renaissance and Baroque Images of Rome" will be on view at the Michael C. Carlos Museum of Emory University from August 24 through November 17, 2013. This spectacular temporary exhibition includes maps, views, and books on Rome from the sixteenth, seventeenth, and eighteenth centuries.

Over 130 works of art, many from the Carlos Museum’s permanent collection, representing ancient Rome will be showcased in three major sections—Antichita, Teatro, and Magnificenza. "Antichita" includes the Antiquae urbis imago, Pirro Ligorio’s 1561 reconstruction of the ancient city as the focal point of the antiquarian interests during the Italian Renaissance of the sixteenth-century. Ligorio’s reconstruction will be surrounded by works by Hieronymous Cock, several others from the Speculum Romanae Magnificentiae, Mirror of the Magnificence of Rome, a Renaissance "coffee table book" of prints of the sights of Rome produced by the French print seller and publisher Antonio Lafreri (1512-77), and images of the obelisks moved by Sixtus V—all from the Museum’s collection. This section also includes volumes from the rare book collections of the Emory Libraries such as De ludis circensibus by Onophrio Panvinio.

Antiquarians of the Renaissance were humanist scholars who sought to reconstruct, at least intellectually, Rome as it was in antiquity by studying coins, inscriptions, fragments, and the city’s ruins. The images show monuments that have been restored, healed of the ravages of time. Ligorio was one of the leading antiquarian scholars of his day. Cock on the other hand depicts the ruins just as they appeared in the sixteenth-century. The Colosseum is ravaged by time, with plants sprouting among the stones. This is the picturesque Rome that contemporary visitors to the city actually saw.

The "Teatro" of the seventeenth-century, the second section of the exhibition, is anchored by an impression of Giovanni Battista Falda’s 1676 Nuova pianta, lent by Chicago collector Vincent J. Buonanno. Also included are images from Falda’s depictions of the Giardini di Roma, as well as several books of the period. These works record the efforts of the seventeenth-century popes to refocus attention on the modern city through urban interventions known as “theaters” or “teatri.” Piazzas were broadened and opened up to become stages where the life of the city took place and the power of the Church could be asserted. The most striking example is St. Peter’s Square. Falda’s many etchings show the theaters of the Baroque city.

The "Magnificenza" of the eighteenth-century features Giovanni Battista Nolli’s Pianta grande and Giuseppe Vasi’s Prospetto dell’alma città di Roma. Also included are numerous views by Giovanni Battista Piranesi from the Museum’s collection and a copy of Jean Barbault’s Les plus beaux monuments de Rome ancienne among other items from Emory’s rare book collections. Also featured is a survey of Roman guidebooks through the centuries. In this section there are three different types of representations of the magnificence of the Eternal City by three different designers. Nolli’s map is an example of the rational, scientific thinking of the Enlightenment. Vasi follows in Falda’s footsteps making an encyclopedic collection of views of contemporary Rome. Piranesi takes an archaeological interest in the city and creates strikingly dramatic, imaginative views of the ancient monuments. Visitors to Rome on the Grand Tour purchased these prints as mementos of their sojourn and as evidence of their own learned interests.

Margaret Shufeldt, Carlos Museum Curator of Works on Paper, and Sarah McPhee, Emory’s Professor of Art History, are co-curators of the exhibition. Shufeldt notes, “This exhibition offers our visitors a chance to experience the Eternal City through the works of master printmakers across three centuries. One will be able to wander the city in detailed maps and marvel at imposing architecture in the diverse images of Rome.”

A Virtual Experience of Rome
In an exciting and innovative use of technology to bring the exhibition to life, the Carlos Museum is collaborating with Sarah McPhee and Jordan Williams and Erik Lewitt of plexus r + d to develop Virtual Rome. The virtual experience is grounded in the celebrated bird’s-eye view map of Giovanni Battista Falda, published in 1676, which subsumes the fine detail of over 300 etched views of the city made by the young artist. The composite image shows the urban fabric in exquisite visual detail, allowing the patient viewer to stroll the streets, count the windows in facades, and distinguish deciduous trees from evergreens.

Falda’s two-dimensional map will be transformed into a virtual, walkable Rome using the gaming platform known as NVis360. A team of educators, architects, and IT experts are documenting Falda’s Rome in maps and views, checking Falda’s data against Rome today, the surveyed map of 1748 by Giambattista Nolli, and the seventeenth-century ichnographic and surveyed maps that survive in the Roman archives. Through Virtual Rome, museum visitors will be able to journey back in time to experience the Eternal City of the seventeenth-century. Virtual Rome is possible because of the generosity of Vincent J. Buonanno, who has made his extraordinary collection of Falda maps and views available in actual and digital form. McPhee notes, “The gaming platform allows us to follow the invitation of Falda’s prints to stroll the city with our eyes: to navigate lost streets and squares, take in vanished prospects, experience seventeenth-century Roman teatri in the round. This is the first time a gaming platform has been used at Emory University to recover urban history through an immersive and interactive reconstruction. We look forward to sharing the exciting results.

This exhibition has been made possible through the generous support of the Lamar Mixson Foundation, the Emory Libraries and the Manuscript and Rare Book Library (MARBL), and Mr. Vincent J. Buonanno.

About the Michael C. Carlos Museum
The Michael C. Carlos Museum of Emory University collects, preserves, exhibits, and interprets art and artifacts from antiquity to the present in order to provide unique opportunities for education and enrichment in the community, and to promote interdisciplinary teaching and research at Emory University. The Carlos Museum is one of the Southeast's premier museums with collections of art from Greece, Rome, Egypt, Near East, Nubia, the Americas, Africa, and Asia, as well as a collection of works on paper from the Renaissance to the present. For location and admission information, visit the Museum website: [Location and Admission

In front of the Michael C. Carlos Museum