A now-sober hairdresser reflects on his rebellious past and family relationships in this honest new memoir released by Dog Ear Publishing. 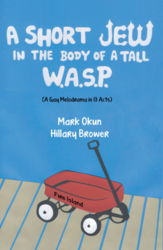 Dog Ear Publishing releases “A Short Jew in the Body of a Tall W.A.S.P.: A Gay Melodrama in 13 Acts.”

This new memoir details the exploits and struggles of a flamboyant and rebellious gay man whose good looks opened doors into a world of partying, drugs, sex, and rock and roll.

Blond-haired, blue-eyed Mark Okun knew from an early age that he was adopted, raised by short, European Jews. This new memoir details the exploits and struggles of a flamboyant and rebellious gay man whose good looks opened doors into a world of partying, drugs, sex, and rock and roll in the 1970s and ’80s in New York City, Fire Island and Miami. As the AIDS epidemic hits, Okun uses the values instilled by his loving parents to find strength to survive. A decision to become sober and healthy eventually leads to a reunion with his biological family at age 42 on a television show.

“A Short Jew in the Body of a Tall W.A.S.P.: A Gay Melodrama in 13 Acts” details the author’s childhood in Syracuse listening to stories from his Russian grandmother, hanging out with the hippies who begin showing up in 1967 by the university and running away at age 13 to Los Angeles. He ends up back home but hasn’t lost his rebellious ways, cutting class and working backstage to meet musicians like Led Zeppelin and Janis Joplin. A haircut at an expensive salon in New York City inspires Okun to begin cutting hair at age 16. He attends beauty school full time and moves to New York City after graduation to begin his career.

Ups and downs lead to him moving back to Syracuse, and he comes out to his mother and becomes close to his father. He eventually moves back to New York, and his hairstyling career begins to take off. It takes hitting rock bottom and losing friends to AIDS several years later to lead Okun to AA and a sober lifestyle. Life begins to improve when he buys a boat and hangs out with the “Jewish navy” on Fire Island. In the wake of family tragedy, he has an unexpected encounter at an AA meeting that will change his life. A friend helps him track down his biological family, and he re-invigorates his career. This no-holds-barred memoir will resonate with anyone who has struggled or watched loved ones struggle with their role in the world and reveals the importance of love no matter what form it takes.

Author Mark Okun, who grew up in Syracuse, is a hairdresser with clients in Miami, Palm Beach and Memphis. His salon is in New York City. He and his partner of 17 years, John Wendell, live in Jersey City. Co-author Hillary Brower, a lawyer focusing on criminal defense and family law, has a law degree from Brooklyn Law School and is admitted to practice law in New York and New Jersey. Her career has inspired her to write short stories based on her experiences.
----------
For additional information, please visit http://www.MarkOkunBooks.com.