Make lasting memories courtesy of the new baseball package from popular downtown Oakland hotel. Enjoy 2 MVP tickets to an Oakland A's game, transportation to and from the Coliseum and spacious accommodations in a premier downtown location! 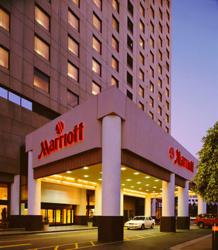 As the sights and sounds of baseball season begin to linger over the East Bay, the Oakland Marriott City Center is excited to announce the Cheer the A's to Victory hotel deal. Perfect for both Oakland Athletics fans and baseball enthusiasts everywhere, this package includes two MVP tickets to a designated game, a pair of round-trip Bay Area Rapid Transit passes and deluxe accommodations the night of the game. Choose your game from a variety of home match-ups against the biggest names in Major League Baseball, and grab a Coliseum-bound BART train directly outside the hotel!

Featuring MVP seats located behind the dugout, you'll be up close and personal - as close to the action as you can get without being on the roster! With the Oakland hotel deal starting at $217, this is truly a convenient and affordable way to see a great game at the O.co Coliseum, as it’s known among locals. The game dates range from May 27th to September 22nd, but act fast, because packages are limited! To reserve your spot, visit the Oakland Marriott’s website or call 1-800-228-9290 and use promotional code ‘SPO.’

Enjoy watching other top-tier teams such as the St. Louis Cardinals, New York Yankees, and Texas Rangers take on our beloved Athletics. Reserve a package for a select game with fireworks and enjoy a stunning display set to themed music - right from the field! MVP packages are available for the following Oakland A's games:

This Oakland hotel deal is valid seven days a week through Sept. 22, 2013. Package must be booked a minimum of four days prior to game day and only a limited number of rooms are available for this promotion.

About the Oakland Marriott City Center

The Oakland Marriott City Center offers stunning views of the San Francisco Bay, Lake Merritt, Golden Gate Bridge and Berkeley Marina and is convenient to Chinatown, Jack London Square and plenty of fine dining and shopping. Guests have easy access to the adjacent Oakland Convention Center and the BART subway system just across the street from the Oakland hotel. The hotel offers 481 rooms and eight suites on 21 floors along with 36 meeting rooms with 89,000 square feet of flexible space, five concierge levels, a new lobby, two restaurants, a state-of-the-art fitness center and outdoor pool. For more information, visit http://www.marriott.com/OAKDT or http://www.facebook.com/OAKmarriott.