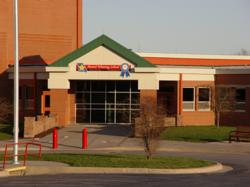 Our success rate in terms of justice served has tripled. It has probably tripled my efficiency as well. It really is night and day from when I first arrived to the capabilities we have now. Dan Nagel, Assistant Principal

When Dan Nagel, Assistant Principal and Athletic Director, assumed his position two years ago, his many responsibilities included attendance and discipline for the school’s 605 students. One of the tools at his disposal was the existing video surveillance system. “We had about 16 analog cameras and the images were not very clear at all. The DVR was hard to work with, and even if you did figure it out, getting positive ID on a student was quite difficult. We had to make an identification by looking at the clothes a student was wearing. If we didn’t solve an incident that day, and the students showed up the next day in different clothes, we were out of luck.”

Nagel secured funding in the 2012 budget to upgrade the school’s video surveillance technology. The high school had a number of integrator companies come in, demonstrate their equipment, and explain how they would design and install a new system. “We wanted IP over the DVR technology,” Nagel recalled. “We discussed different camera resolutions and camera coverage strategies with each of the potential integrators.”

Chillicothe High School selected SMC and their package of ExacqVision Client video management software and IQinVision HD megapixel cameras. “We have several long hallways,” Nagel explained, “and we tried to reduce the overall number of cameras needed by utilizing wide camera angles and deploying higher megapixel cameras.” The installation was completed in June 2012 and after nearly a year of use; Nagel and fellow staff are suitably impressed.

“We probably utilize the system once a day for minor incidents, and once a week for something major,” Nagel said. The IQeye cameras are located anywhere students tend to congregate—in front of classrooms and banks of lockers, bathroom entrances, the cafeteria, and the commons. The school’s Resource Officer wanted coverage of the school front entrance and, of course, there are long views down all the major hallways. Cameras also keep an eye on the parking lots. Nagel and staff use the video mainly for after-incident review, although there is a camera in the Internal School Suspension room, which is monitored live because staff cutbacks don’t allow for a teacher in that classroom.

“We have a lot of incidents where video has been key,” Nagel explained. We have traffic accidents and the occasional fight where video is quite valuable. We had an incident where a student was truant and the video system documented the vehicle she got into in the school parking lot. Her mother recognized the car and we were able to quickly solve that situation. We also review video to investigate stolen property claims; it’s valuable for a lot of different situations.”

Both Nagel and the school principal are able to view all 28 IQeye camera feeds on their computers, as is the District Superintendent. The principal’s secretary monitors a camera trained on the school’s front entrance. The high school stores video for at least 30 days, but to date Nagel has only needed to access and review video up to about two weeks old.

Nagel continued, “Now I don’t have to worry about who is telling the truth and who is not telling the truth—we can figure things out easily and quickly. Between our old system and the ExacqVision and IQinVision system, it is night and day. Our success rate in terms of justice served has tripled. For any incident, I used to have to have to interview three or four students, write everything down on a legal pad, figure out who knows what and who won’t tell on their friends…now, I just pull up the video. It has probably tripled my efficiency as well, and I’m able to channel that time into my Athletic Director role and other Assistant Principal activities, and not doing discipline. It really is night and day from when I first arrived to the capabilities we have now.”

About IQinVision
IQinVision has been designing, manufacturing and marketing the IQeye line of HD megapixel IP cameras since 1998. A world leader in IP network camera products, IQinVision is renowned for image quality, stability and reliability in the harshest environments. ONVIF and PSIA compliant, IQeye cameras are integrated with all leading NVRs and are backed by the most comprehensive warranty program in the industry. The company’s products are widely deployed in banking/finance, city surveillance, commercial/industrial, critical infrastructure, education, gaming, government/law enforcement, healthcare, retail and transportation applications. IQinVision is a privately-held corporation headquartered in San Juan Capistrano, California with a regional office in the Netherlands. For more information: http://www.iqeye.com