The most comprehensive review of the scholarly domestic violence research literature ever conducted concludes, among other things, that women perpetrate physical and emotional abuse, and engage in control behaviors, at comparable rates to men. The study was directed by the Editor-in-Chief of Partner Abuse, a Springer Publishing Company journal. 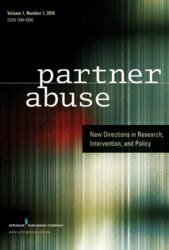 People in the domestic violence field say that ‘it’s all about the victims.’ Well, the victim is not always the one hit, but sometimes the one arrested.

The most comprehensive review of the scholarly domestic violence research literature ever conducted concludes, among other things, that women perpetrate physical and emotional abuse, as well as engage in control behaviors, at comparable rates to men. The Partner Abuse State of Knowledge project, or PASK, whose final installment was just published in the journal Partner Abuse, is an unparalleled three-year research project, conducted by 42 scholars at 20 universities and research centers, and including information on 17 areas of domestic violence research.

“Over the years, research on partner abuse has become unnecessarily fragmented and politicized,” commented John Hamel, Editor-in-Chief of Partner Abuse and PASK Director. “The purpose of this project is to bring together, in a rigorously evidence-based, transparent and methodical manner, existing knowledge about partner abuse, with reliable, up-to-date research that can easily be accessed by anyone. PASK is grounded in the premises that everyone is entitled to their opinion, but not to their own facts; that these facts should be available to everyone, and that domestic violence intervention and policy ought to be based upon these facts rather than ideology and special interests.”

Among PASK’s findings are that, except for sexual coercion, men and women perpetrate physical and non-physical forms of abuse at comparable rates, most domestic violence is mutual, women are as controlling as men, domestic violence by men and women is correlated with essentially the same risk factors, and male and female perpetrators are motivated for similar reasons.

“Although research confirms that women are more impacted by domestic violence,” stated Hamel, “these findings recommend important intervention and policy changes, including a need to pay more attention to female-perpetrated violence, mutual abuse, and the needs of male victims.”

Hamel also argues that men are not only disproportionately arrested in domestic violence cases, but sometimes arrested for arbitrary reasons, citing, for example, that police often arrest the bigger and stronger party in cases where the perpetrator is unclear. “Such policies are not only ineffective but violate people’s civil rights,” Hamel concludes. “People in the domestic violence field say that ‘it’s all about the victims.’ Well, the victim is not always the one hit, but sometimes the one arrested.”

For more information or to schedule an interview with John Hamel, contact Dara Salem at dsalem(at)springerpub(dot)com, or at 212-804-6236.

About Springer Publishing Company
A pioneer in social science and health care publishing, Springer Publishing Company is known as an innovative psychology, nursing, public health, rehabilitation, social work, counseling, and gerontology publisher. The company has won numerous awards, including the American Library Association (ALA) Choice Awards, the Association of American Publishers (AAP) PROSE Awards, and the American Journal of Nursing (AJN) Book of the Year Awards, and publishes more than 100 top quality titles annually, all available as eBooks, in addition to 21 journals. From psychology to nursing, Springer Publishing Company is passionate about providing the best professional books, textbooks, guides, and reference works to professionals, instructors, and students. For more information, visit http://www.springerpub.com.