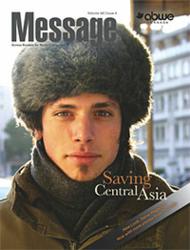 We are thrilled that our communications team received this recognition.

The magazine received Awards of Merit for missionary and most-improved publications and also received a Higher Goals Award for placing fourth in the publication redesign category. A panel of experts from EPA judged the awards to "honor the best work done in our industry during the 2012 calendar year."

“We are thrilled that our communications team received this recognition,” said Neil Glotfelty, ABWE’s Vice President of Home Office Services. “They’ve worked hard at creating and redesigning a mission magazine that has not only made an impact in the ABWE family but spread the stories of God’s glorious work around the world.”

Message magazine rolled out its redesign in December 2012, moving from a smaller, digest format to a full-size magazine focusing on rich, vivid imagery and a clean, more modern design. Judges praised Message for its “good, clear writing” and “striking design”.

The December issue featured a cover story on the College of Theological Education in Moldova, which is the largest school for Muslim-background believers in the world.