Cellular Connections on Tablets Increase 48 Percent in First Quarter of 2013, According to The NPD Group

Wireless carriers are making inroads getting tablet owners to use the cellular capability on their devices, but there are still an overwhelming majority of tablet owners who don’t use it. 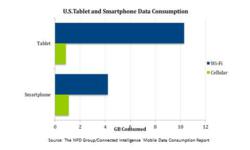 Most consumers haven’t found that key application convincing them to add a cellular connection.

Wireless carriers are making inroads getting tablet owners to use the cellular capability on their devices, but there are still an overwhelming majority of tablet owners who don’t use it. According to new NPD Connected Intelligence research, cellular connections for tablets grew 48 percent in the first quarter of 2013 compared to the first quarter of 2012, but still are only utilized on 12 percent of the tablets in the U.S.

“Most consumers haven’t found that key application convincing them to add a cellular connection,” says Eddie Hold, vice president, Connected Intelligence. “Another set-back is that many tablets purchased today do not include a cellular modem, which further limits the directly-addressable market for mobile operators. Instead, these operators need to focus on tethering and mobile hotspot solutions in order to grow the market more rapidly.”

Where cellular connectivity has been activated, usage consumption is actually lower than smartphones, with an average of 850 MB of cellular data used per month, compared to 1 GB on smartphones, according to the Connected Intelligence Mobile Data Consumption Report. This contrasts with tablet Wi-Fi data use, which averages around 10 GB of data per month, or more than 2.5 times the amount of Wi-Fi data being used on smartphones.

The connected tablet market is currently dominated by and AT&T and Verizon Wireless according to the Connected Intelligence Mobile Broadband Market Share Report. This is, in large part, due to the fact that most consumers purchase the tablet connection from their current cellular (smartphone) provider. This, combined with an early embrace of iPads, has helped the two top carriers to own a very significant share of the market.

“The combination of a current dominant position and the launch of mobile share plans last year have helped the top two carriers strengthen their market share,” says Hold. “However, unlike smartphone subscriptions, these tablet users can prove to be far more fickle in their ongoing need for cellular tablet connections and all carriers need to work hard to show the value and benefit that comes from an always-on tablet solution in order to defend – and expand – their all-important tablet base. Finding the key use scenarios for mobile tablet use, rather than the current nomadic tablet usage is key.”

The Mobile Data Consumption Report leverages on-device metering (the SmartMeter) with a panel of 2300 users. The data provides an accurate measurement of mobile data use including both cellular and Wi-Fi data.

The Mobile Broadband Market Share Report uses a combination of carrier financial data, consumer panel information and sales data, combined with other proprietary sources to create a view of the connected device market.

Connected Intelligence provides competitive intelligence and insight on the rapidly evolving consumer’s connected environment. The service focuses on the three core components of the connected market: the device, the broadband access that provides the connectivity and the content that drives consumer behavior. These three pillars of the connected ecosystem are analyzed through a comprehensive review of what is available, adopted, and consumed by the customer, as well as reviewing how the market will evolve over time and what the various vendors can do to best position themselves in this evolving market. For more information: http://www.connected-intelligence.com. Follow Connected Intelligence on Twitter: @npdci.