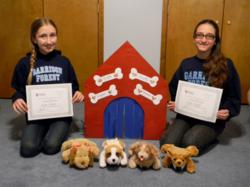 “Collaborating together as a team for the robot dance turned out well, because we used both of our ideas to create an even better idea."

Sisters Jackie ’16 and Alyssa ’19 Magaha like to compete but not against each other. For the Magahas, there’s no sign of sibling rivalry in the Robotics arena, especially at the annual Johns Hopkins Robo-Challenge competition. In fact, it’s their highly tuned sense of teamwork and shared love of engineering that enabled them to dance/engineer circles around the competition at the April 27, 2013 Johns Hopkins Robo-Challenge.

Both Jackie and Alyssa are members of the GFS Robotics teams for the Upper School and Middle School, respectively. The Magaha sister team won three awards in the "So You Think Your Robot Can Dance?" Robot Dance Category: First Place, Judge's First Place Award and the highly coveted Viewer Choice Award. Alyssa came up with the idea for this year’s competition while watching Jackie’s win in the Innovative Use category last Spring: several BOEBots coming out of a dog house to “Who Let the Dogs Out?” and dancing to the one-minute engineered routine to the song.

Jackie and Alyssa began working on the idea immediately following the 2012 competition. With technical advice from their father Dave, a computer engineer, the sisters spent four months programming four robots to do the dance. They sacrificed several stuffed dogs for the robot’s costume and even programmed the dog’s heads to move and their tails to wag.

“The best part of the competition is seeing all of our hard work finally pay off,” said Jackie. “Together we contributed ideas for the choreography of the dance. Working as a team allowed us to be efficient and finish sooner, combining our different skills to create something that one person could not have done alone.”

In her first JHU competition, Alyssa won 2nd place in the Robot Tumor Challenge against high school boys. Jackie also competed in the Petite Slalom event at Hopkins. Jackie is a veteran of four JHU competitions. In 6th grade, she garnered an Honorable Mention in her first competition and won the “So You Think Your Robot Can Dance?” (Robot Dance) competition in 2010, in addition to last year’s first place nod in Innovative Use.

“After three years of sitting on the side and cheering on my sister, I finally thought that this year it was my turn to join the competition,” said Alyssa. “Collaborating together as a team for the robot dance turned out well, because we used both of our ideas to create an even better idea. With our creative and scientific minds, our robot dance became a robot success. I have no idea what I would do without my sister.”

Jackie and Alyssa have already begun working on next year’s entry.