The cartwheel is an expression of joy the world over – and in Düsseldorf it’s not only a local tradition, but also a unique competition since 1937. On July 7, 2013, the best young cartwheelers come to Düsseldorf to compete in speed and style. 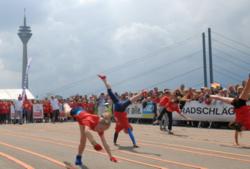 In Düsseldorf, every visitor will come across the image of a cartwheel sooner or later.

A visit to Düsseldorf might make you want to do a cartwheel or two. Go ahead, you won’t be the only one. Locals express their joy by cartwheeling all the time, and legend has it that cartwheels are a common sight here since 1288. Every visitor will come across the image of a cartwheel sooner or later, or even have children offer to perform them for money (a nickel or a dime a piece), as they do to passers-by on the street. The city founded an annual cartwheel championship in 1937, and now more than 700 boys and girls from up to 15 countries compete every year. The next event will take place July 7, 2013, outdoors in the city center right by the Rhine River Promenade.

As an expression of joy, doing cartwheels these days certainly makes sense, as Düsseldorf ranks #6 on a list of global cities in terms of quality of life (Mercer Consulting Survey 2012). But there is more to the city’s love affair, and there are several legends about how the tradition started. One says it happened in 1288, when Düsseldorf was granted town charter after a fierce battle and children ran into the streets doing cartwheels to celebrate. Another legend talks about a boy who jumped and held the wheel of Prince Jan Willem’s carriage for safety after it broke in an accident, turning him into a living wheel.

The city is also filled with references to and statues of cartwheelers, the most famous being Cartwheel Fountain in the city’s historic Old Town. Even manhole covers and the doorknob at the famous Lambertus Church feature cartwheels, and they are one of the most popular Düsseldorf souvenirs.

Teams of boys and girls in the age groups 8-10 and 11-12 from schools in several countries compete in the championship. The children race each other doing cartwheels over a distance of 50 – 65 feet and are judged in speed or style. Each year more than 700 children participate. The event begins at 7:30 AM and ends around 5:00 PM.

For more information on the Cartwheel Championship, please visit http://www.duesseldorf-tourismus.de/en/our-top-events/stadtsparkasse-cartwheeling-tournament/.

The city’s tourism office is offering hotel and city specials for many of the city’s great events throughout 2013, including the Cartwheel Championship. The travel package called “Düsseldorf à la Card” can be booked right from the tourism office’s website at http://www.duesseldorf-tourismus.de/en/hotel-packages/duesseldorf-a-la-card/. Prices start at €49 per night per person based on double-occupancy for a 2-3 star hotel in the city center and at €95 per person for a 4-5 star hotel. All packages include breakfast, a Düsseldorf Welcome Card (free public transportation within city limits, plus more than 40 free or reduced admissions to city attractions), and a city information package.