Data Shows U.S. Ranks No. 1 in the World with a Burglary Every 14 Seconds

Data from My Protection Link reveals the United States has more than 4x more burglaries than any other country. 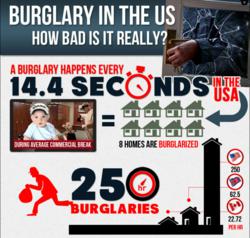 It's shocking to think that during the average television commercial break, eight homes have been burglarized in the U.S.

Statistics uncovered by MyProtectionLink.com show that the U.S. outpaces all other countries in burglaries occurring each hour. At 250, the number soars above the United Kingdom and Canada, with 62.5 and 22.7, respectively. In fact, every 14.4 seconds, a home in the U.S. has been burglarized; four times the rate of the United Kingdom, where a burglary occurs once every minute.

“We were shocked to learn some of these statistics, especially that during the average television commercial break, eight homes have been targeted,” said researcher Gerad Hoyt. “The numbers prove that home security is a hugely important issue for Americans.”

MyProtectionLink.com has produced a compelling, informative visualization that presents the most alarming statistics on burglary in the United States, including a Top 10 Cities list and comparisons to other countries around the world.

Statistics uncovered by MyProtectionLink.com show that cities with the largest populations have more burglaries per capita than smaller cities – the burglary rates for larger cities are more than 43% higher. However, the 10 worst cities in the country all have populations of less than half a million people. Taking the top spot is Flint, Michigan, a city with just more than 100,000 residents, where you are four times more likely to have your home burglarized than in any other city.

If you live in the South, your chances of being burglarized are 50% higher than anywhere else in the country. In fact, eight of the 10 worst states for burglary rates are in the Southern region: Arkansas, North Carolina, Alabama, Mississippi, Louisiana, South Carolina, Tennessee and Georgia.

The effect of burglaries on Americans’ assets is staggering. Burglaries account for $4.78 billion (yes, billion) in losses for Americans each year, more than the individual profits of Bank of America, AT&T, Target, Boeing, Verizon, Best Buy, Comcast and Home Depot.